In what eyewitnesses called a foolish act of bravery, a British man stripped down to his underwear and made his way across a frozen Essex river to save a drowning dog. 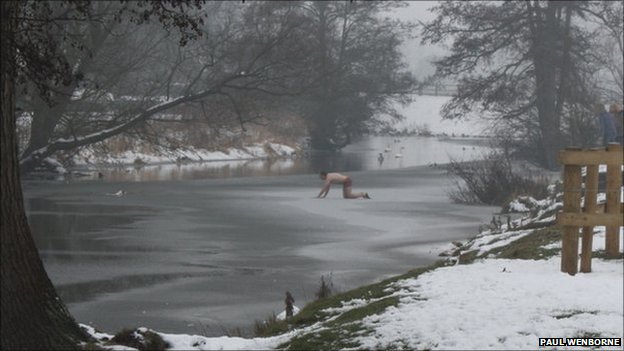 The incident occurred Sunday morning at approximately 10am. Dog Walker Paul Wenborne captured an image of the man as he crawled across thin ice on the River Stour, in Dedham, Essex, calling out to the dog and drawing more than a bit of attention for doing so in nothing but his underwear.

“I was with two friends and we couldn’t believe what we were seeing. He stripped down to his pants and started crawling across the ice. About a yard or so from the dog, he fell in but managed to get hold of the dog and put it on the ice. He then had to swim two or three yards and then crawl back on the ice to dry land.”

The identity of the dog’s savior remains a mystery. Despite his heroic act, the man was apparently unconcerned with being credited for saving the dog. He simply disappeared. “He put his clothes back on and carried on. It was a foolish act of bravery,” said Wenborne.

Essex Fire Service confirmed that it was never called to the incident.