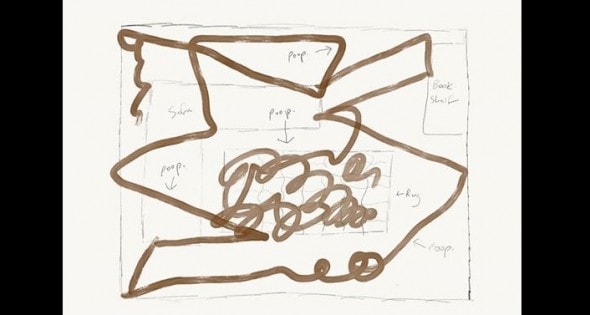 Roombas are pretty cool devices.  For those of you who don’t know, they are an autonomous vacuum cleaner that goes throughout your house.  It basically takes the work out of vacuuming.  However, as Jesse Newton discovered the hard way, there are drawbacks to these incredible devices.

The flaw, according to Newton, becomes very apparent when your Roomba device runs over a dog turd.  As funny as it may sound, his Roomba did just that, but instead of picking it up and moving on, it dragged the dog poop all over the house.

According to Newton, he knew something was amiss after his four-year-old son crawled into bed with his wife and him.  The smell gave it away almost instantly.  Newton got out of bed to clean up his son, and that’s when he saw the full scope of the fecal carnage the robot vacuum created had wrought.  It was EVERYWHERE!

After getting his son cleaned up, he then took on the task of cleaning up everywhere else.  He did the best he could, but unfortunately his wife’s favorite rug was destroyed beyond saving.  It took about three hours, but his son was cleaned up and so was the house.  He even tried to clean up the Roomba, but chucked it into a bathtub of water and forgot to take the battery out beforehand.

“The story was funny, and we laugh at it now, but I was pretty upset at the time,” he said. “I was tired, and I was covered in dog poop, and I knew I had just fried our Roomba.  DO NOT, under ANY circumstances, let your Roomba run over dog poop!”