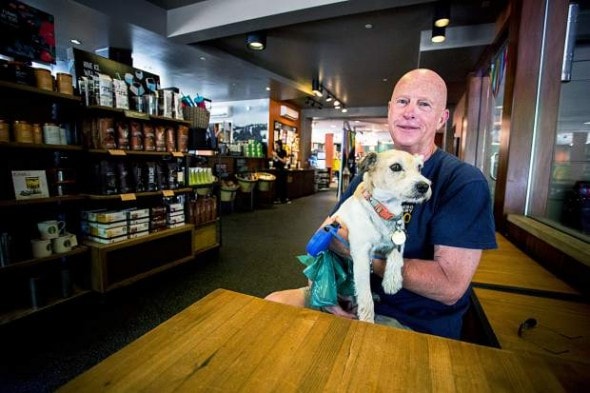 An incident that occurred at a coffee shop in Aspen, Colorado recently has prompted a man to make a complaint to the Department of Justice.  Ivan Lustig suffers from acute anxiety syndrome, and has a therapy dog he goes out into public with.  Lustig feels his rights have been violated, but city officials are saying that Ink Coffee handled the situation correctly.

“I have acute anxiety syndrome, and I have panic attacks, and he proves to be a buffer between me and my anxiety,” said Lustig.  “He provides a calming effect.”

Lustig and his dog, Kobi have been regulars at the coffee shop for years now.  Ink Coffee hasn’t given Lustig any issues having his therapy dog with him up to now.  However, when he refused to remove Kobi from a couch in the lounge area, a customer called the police.

“A customer came into the business and said, ‘Your dog cannot be on the couch,’” Lustig said.  “I asked him, ‘Are you a police officer?’ and he said, “No.’  I told him to mind his own business.”

The very next day, Lustig and Kobi were informed that they will no longer be welcome in the coffee shop.  The owners claim that this isn’t the first incident involving Lustig and Kobi.

“The cops had to show up, and that wasn’t the first time a customer complained about this,” said Keith Herbert, president and CEO of Denver-based Ink Coffee.  “We asked him 10 times not do that.  You can’t allow the dog on the couch.”

Rachel Burmeister is an environmental-health specialist for the city of Aspen.  Burmeister said Ink Coffee took the correct steps in this situation.

“The restaurant always has the ability to ask a patron to leave if the service dog is not acting in an appropriate way,” she said.  “Getting on couches, getting out of control, are legitimate reasons to move the dog from the premises.  In Ivan’s situation, they asked him to move his dog and he refused, and the police got involved.”

Lustig says that he didn’t want to be a burden on the cafe.  Lustig really does take Kobi everywhere with him, and is very selective in his choices of establishments he will go to.

“I don’t want to drag him into a steakhouse, although legally I’m entitled to,” he said.

He said the problem only came up due to a customer’s overreaction on the day in question.

“Kobi was on the ground and then jumped on the couch, and the customer started down the road with this drama,” he said.

Lustig has gone and filed a formal complaint against Ink Coffee.  He says he doesn’t want others with service or therapy dogs to have to encounter the same treatment he did.

“I don’t want them doing this to anybody else,” Lustig said.  “That’s my motivation.”