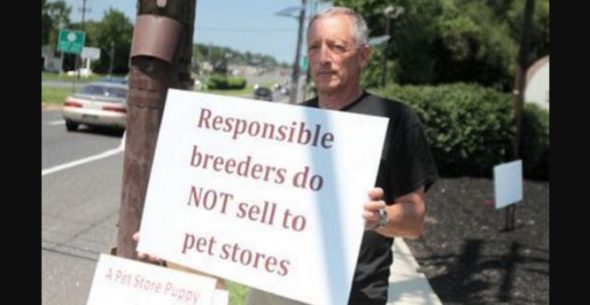 Back in the summer of 2015, Pat Youmans was dealing with a problem.  He was the owner of a puppy shop, and his issue had to do with the protesters that would stand across from his shop advocating for rescuing animals and not selling them.  They were there, every single day, and Youmans has finally had enough.  He closed his shop, and has turned to rescuing dogs instead.

At that point, his then-fiancé was eight months pregnant, and customers of his store frequently told him that they feared leaving the store and walking back to their cars after shopping there.  To say that business dropped off would be an understatement.  Youmans felt like he was left with little choice in the mater.

“I looked at (my fiancé) and I said, ‘There are two things that are going to happen here.  I’m going to walk outside and he’s going to help me or I’m going to jail.’ I’m done,” he said in a recent interview.

The “he” that Youmans is referring to was Alan Braslow.  Braslow is basically the driving force behind the daily protesters.  He was accusing Youmans of selling puppy mill dogs.  At one point, Braslow gave Youmans an ultimatum: He could start selling rescue dogs, of the protests would continue every single day for every hour he was open.

Two years on, and now Braslow and Youmans talk to each other, and are even capable of more than just basic civility between themselves, as well.  Braslow even visits the new shop regularly, and the two can definitely share a laugh about the feud they had.

“He hated me,” said Braslow.  “But they’re doing what’s right now and that’s all that matters.”

The Humane Society of the United States estimates that there are around 10,000 puppy mills in the United States.  The state of New Jersey has over 100 cities that have passed legislation banning the practice, however enforcement isn’t always the easiest thing.