Fresno man William Weir helped police make a case against him and was arrested after he posted a video on Facebook of him instigating his pit bulls into attacking and killing a puppy.

Weir claims that the puppy was heading toward his scared daughter and that this was an isolated incident, but police don’t believe his story and think dog fighting has been going on at his residence for much longer.

“That’s not a truthful story,” said Joe Gomez, of the Fresno Police Department.  “He is saying that dogs that come into his yard are going to get killed, but this was a puppy.  If you look at that video, it’s a tiny dog.”

Even more disturbing is the number of dead dogs that have been turning up on Kearney Boulevard, just a few short blocks from Weir’s home. 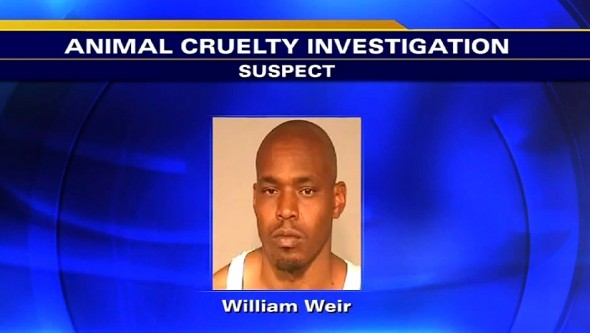 “I’m finding the dogs in plastic bags, usually in your yard or leaf bag, stuff like that,” explained Liberty Animal Control President Daniel Bailey.  “The more we’re getting out and like I said, it’s constant within this street alone.”

Fresno police have no definitive connection between Weir and the dumped dogs, but they are certain that his dogs have killed before.

“I do not believe it’s isolated at all,” Gomez said.  “[It’s] unknown if he’s in a ring, but by looking at his dog and what he was doing, I mean, that’s what people do when they train dogs to fight and to kill other dogs.”

Though Weir inexplicably defended his actions, he admitted to cheering on the fight and relinquished custody of the dogs that are being used as evidence against him.