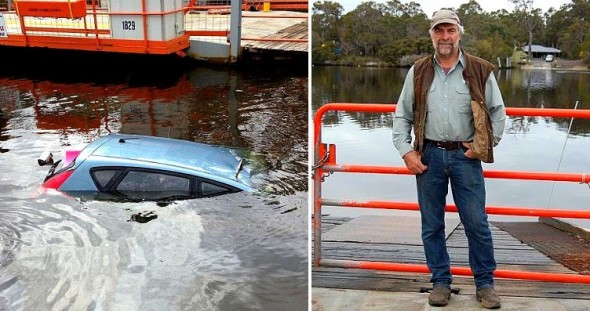 An Australian man was recently awarded a bravery medal for his rescue of an elderly man and his dog, who became trapped in their car after accidentally driving into a river.

Nearly a year ago, Robin Evernden, manager of Molloy Island, was preparing to set off from the mainland on a barge when he saw a man drive off the ferry and into the Blackwood River.

“An elderly gentleman came down and his car accelerated onto the barge and broke through the gates on the riverside, ending up in the river a few meters away from the barge.

“We had to get in the water initially, but trying to get to a car that’s floating is a bit like a ping-pong ball in a river.

“So I ended up going back to the barge and taking the barge out to him.”

Everndon took a second to think, and then decided to wedge one of the barge ramps against the car to keep it afloat.  However, that could only work for so long.

“I was able to reassure [the driver] all the time the car was above water.

“It filled up with water and I couldn’t see him anymore because the car was basically submerged at that point. It must have been pretty scary for him.

“[He] had managed to get into the rear of the car, so still in an air bubble at the back, and at that point that’s when it all got a bit tricky.

“We had to break the window and lie down and get my arms inside and try to find him, made contact and everything, and managed to get his head out the window so he could get some air into him.

“He did exactly as I told him. [I] pushed him back in so he could push with his legs and he popped out like a cork coming out a bottle.

“And it was just a case of dragging him up on the barge and going back for the dog.”

Everndon says that although he isn’t a gifted swimmer, he knew it was do or die for the man and dog.

“You don’t have any time to think about what ifs and everything; you just get on and do what you’ve got to do, and that’s what happened.”

Now the hero has received an award for his good deed.

“It’s nice for recognition so thanks to whoever it was who nominated me.

“I got a very good report from the local boys later on, accusing me of being Aquaman and such things.”