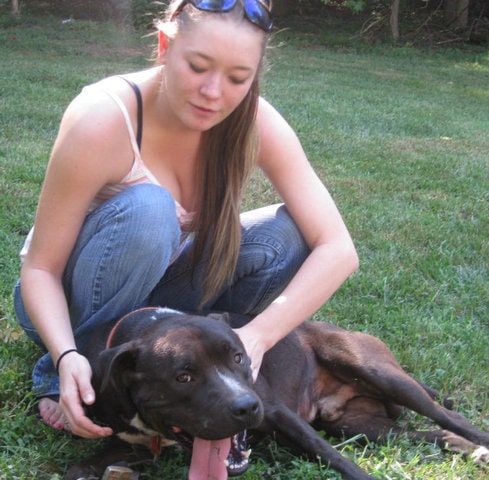 Rich McCoy says that when he learned CPR, he thought he may use it one day to save a human – but instead, the Fort Mill, South Carolina man ended up saving a dog.

On May 28, Ashley Wilson heard her normally quiet pit bull Bam-Bam barking in her back yard. She says she was unprepared for what she found when she went out to see what had him agitated: her other dog, Colt, was hanging by his collar from the top of his kennel fence.

“His body was hanging over the fence and he had no life in his face,” Wilson said. “I’m eight months pregnant and couldn’t get him down myself.”

Rich McCoy was nearby at the time; Wilson called to him to help her get the dog down. He did, but at first it appeared that they had been too late to save him. “Colt’s body collapsed as soon as we pulled the collar off of him,” Wilson said.

Remembering his training, McCoy immediately started CPR on Colt, alternating between blowing air in his snout and using chest compressions.

“Colt didn’t come to immediately. I blew in his mouth a few times enough to see his chest rise up and then started doing chest compressions,” McCoy said. “It probably took about 45 seconds to a minute until he took a small breath. It’s tough to gauge time when your adrenaline is going.”

Colt came around a few minutes later. The stunned dog got back on his feet and immediately drank three bowls of water, McCoy said.

Wilson could not believe it when she saw her dog come back to life. “I was very, very grateful that Rich was able to do CPR and get Colt to come back to life,” said Wilson. “I never would have known how to perform CPR on a dog.”

McCoy was humble, and stressed that it was his training that saved the dog.

“I think the important part about everything is to make people aware that CPR works on both humans and animals,” he said. “I think he would have died without CPR. People should know that CPR works and always give it a shot; don’t call it quits until you’ve done everything you can.”