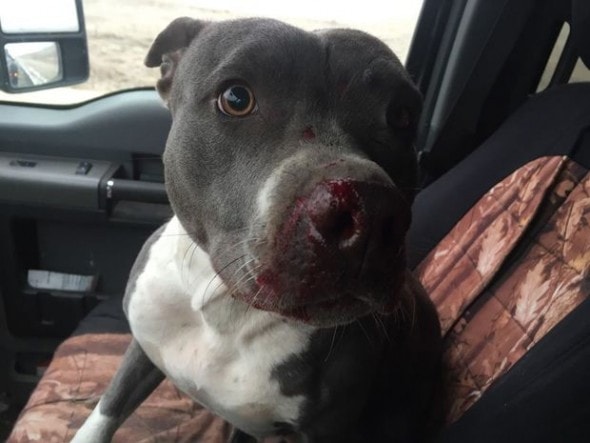 Driving up or down Interstate 94, just west of Bismarck, North Dakota is a normal, almost every day think for Bill Kramer.  He owns a towing and hauling business that puts him on that stretch of road regularly.  However, his trip down that road on Monday was anything but business as usual for Kramer.

It was somewhere around mile marker 95, heading toward Montana where Kramer saw what looked like someone dumping garbage out of their vehicle on the road.  Upon further inspection, Kramer noticed it was not garbage that hit the road at speed.

When the bag the dog was wrapped up in broke open, a pit bull spilled out onto the middle line of the busy road.  She sat up right on the dotted line in between lanes, as vehicles flew past her at speeds of 75 miles-per-hour.

Kramer took the giant Ford F-350 with the 30-foot trailer attached to the ditch on the side of the highway, hoping that he wasn’t going to cause an accident.  At his first opportunity, he backed the trailer into the right lane forcing traffic around it, and the dog.

He got out of the truck and went over to the dog, and could see she was bleeding and injured.  There was an obvious broken leg, and she was all scrapped up.

“At first, I thought, ‘This is stupid.  I’m going to get run over,'” said Kramer.  He at least wanted to get her off the road and away from oncoming traffic.  “I was nervous for her.”

Kramer got on his hands and knees, in the middle of a busy highway, and made his way to her.  It took Kramer’s own dog to get out of the truck, and get her moving towards the cab.  Then Kramer lifted the injured dog into his vehicle.

Kramer is a confessed dog lover himself.  He says that he’s amazed that after being dumped like that, she wasn’t injured worse.  He said he wouldn’t have been able to take seeing her hit by a car.

After she was in his truck, the dog now known as Celine Dion needed help, but Kramer wasn’t sure what to do.  He took a picture of her with his phone, and posted it to his Facebook page.

According to Kramer, “That’s when all hell broke loose.”

His phone was almost instantly overloaded with messages and calls from all over the United States.  People from as far away as Washington state wanted to donate money or care packages, and some were even willing to drive hundreds of miles to get her and bring her in.

“That was kind of cool how people banded together to do something,” said Kramer.  “Social media doesn’t always have the best track record.”

So far, people have donated $900 plus to go towards medical bills, housing and care.  Doctors at the West Dakota Veterinary Clinic where Celine was taken for medical assistance were amazed at how well she was doing given her situation.

They say Celine is between one and two years old.  She’ll be in a cast for a few weeks for the fractured leg to heal, and she had a few scrapes on her face, but nothing worse than that, physically speaking.

Kramer said that he hasn’t had a ton of experience with pit bulls in the past.  However he’s heard the horror stories that many of us have.  Kramer says that his interaction with Celine has completely changed his outlook on the breed.

“She’s a sweet, sweet dog,” said Kramer. He added that she even seemed sorry about the blood all over his truck.  “It definitely tugs at my heartstrings.”

Celine will be going to a friend of Kramer’s.  He promises to post photos of her recovery to his Facebook page as soon as everything is all set, and she’s settled in her new home.