When Gustavo De Rosa learned about Tito, a Dachshund that needed rescue due to a birth defect, the man didn’t hesitate to adopt the canine, even though it meant he had to travel 745 miles to get to the dog. 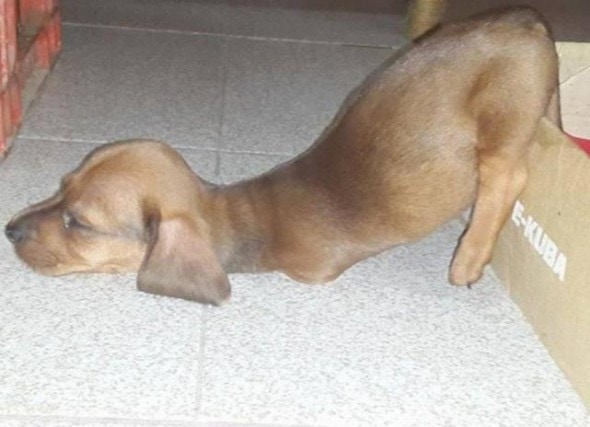 De Rosa, is a 52-year-old man from Buenos Aires, Argentina, who runs an animal rescue center. There are 200 pets currently living at the shelter and the animal rescuer lives with 14 pets in his home. All 14 of De Rosa’s house pets have a disability due to birth defects or diseases, and the man believes that adding the two-legged Dachshund to his pack is just the right thing to do.

Tito was born without his two front legs. When his breeder couldn’t sell him or give him away, she surrendered him to animal rescuers in La Banda, Argentina.

When De Rosa heard Tito needed a forever home, he contacted his rescuers and arranged the 745 mile trip to adopt him and bring the dog home.

“[Tito] is a dog that needs a lot of attention,” De Rosa told local news. “I thought about rescuing him and bringing him to Buenos Aires because there are two homes here designing him prostheses, and we have more specialized veterinarians willing to build a health plan that will help him thrive with just two legs. The idea is to let him grow as normal as possible.”

De Rosa says that traveling a long distance is not a deterrent for adopting a pet, especially if it means saving a pet in need. He also says there are many other people in the country and world just like him willing to do whatever is necessary to help a pet.

“I am willing to offer Tito what he needs in order for him to live a full life,” said De Rosa. “In my house, he will have everything.