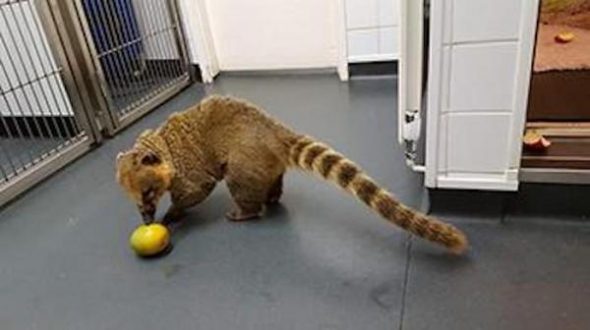 A man was walking his dog in Abbeygate, Middlesbrough, UK when he and his dog came across a very unexpected sight.  They happen upon a ring-tailed coatimundi (coati) just hanging out, and decided to call the Royal Society for the Prevention of Cruelty to Animals (RSPCA) for a rescue.

“Unsurprisingly, the dog walker got quite a shock when he stumbled upon this coati — it’s not what you expect to find in the North Yorkshire countryside!” said RSPCA inspector Nick Jones.

The male coati was in excellent shape, regardless of the fact that it was extremely far from its native South America.  It’s thought that the animal may actually be someone’s pet and the animal may not live too far from where it was found.  The animal was taken to a local vet, was nicknamed Razzle, and was given some fruit.  Until the animal’s owner can be identified, Razzle will be staying at the vet’s office.

“He wasn’t microchipped but we expect he’s escaped from nearby so we’re hoping we might be able to find his owner,” said Jones.  He also said that this will be a call to remember, as he’s never been asked to rescue a coati before.  “It was definitely one of the more bizarre collections I’ve had in my time.”