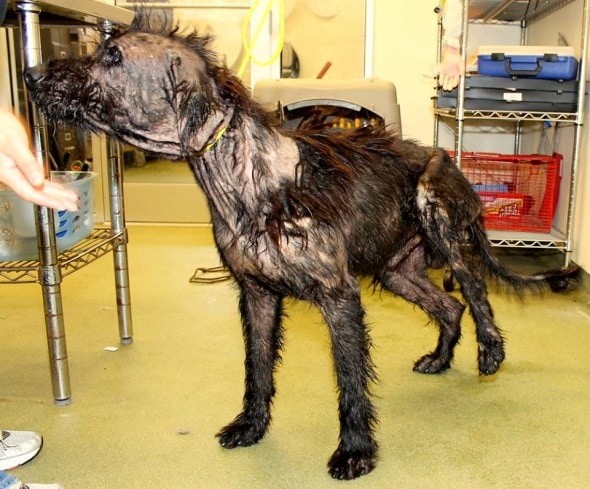 When two-year-old Airedale/Rottweiler Diego was found tied up to a pole in San Antonio, Texas, he was missing hair from mange and covered in used motor oil.  Thankfully, he is now recovering, but we take this time to ask readers to share this important message:  motor oil is an ineffective and dangerous way to treat mange.

It is apparent that Diego’s owners tried to treat his sarcoptic mange the best way they knew how, but after their attempt was unsuccessful, they simply abandoned the sticky, uncomfortable dog at the North Side Humane Society shelter.  Staff quickly got to work on cleaning and pampering the poor pup. 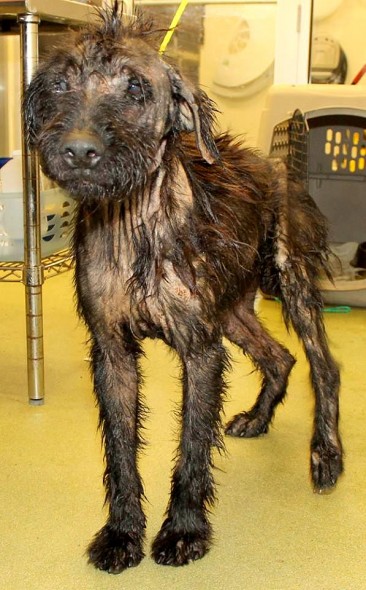 “When greeted, Diego stood right up with his tail wagging and was ready to enter the SAHS,” read a statement on their website.  “He immediately went into spa mode, receiving numerous baths to remove the motor oil that was drenched all over his coat and skin.”

Sarcoptic mange is highly contagious.  Like head lice in humans, mites can easily jump from one dog to another.  According to Vet MD, they burrow under the skin, causing intense itching and scratching, which is what causes dogs’ hair to fall out.  The first symptoms may take anywhere from two to six weeks to present after exposure. 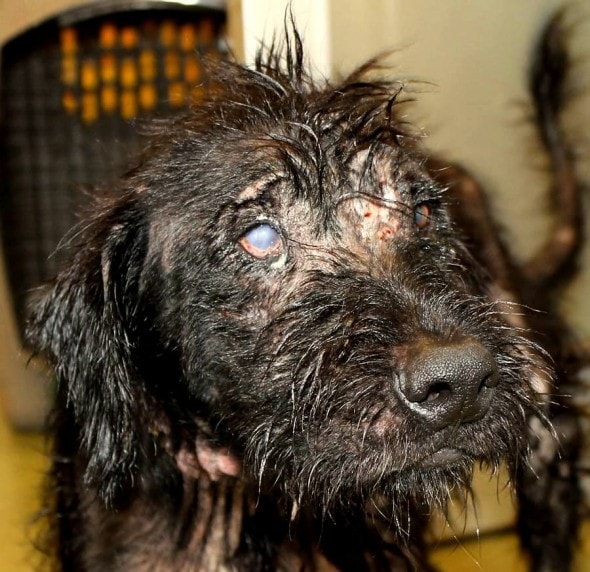 Many people mistakenly believe that slathering on the motor oil will help, but this is highly toxic to dogs.  If you wouldn’t bathe in it, your dogs shouldn’t, either.

In addition to a severe case of the itchies, Diego had to deal sludgy, smelly, poisonous oil on his skin.  He also may have been blinded in his right eye, and will soon be going to a specialist.  A foster family has been provided for him, but monetary donations would be greatly appreciated to assist with his recovery.  If you would like to help, please click here.