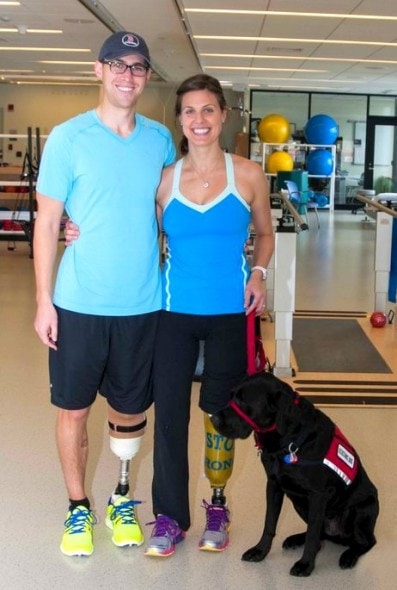 Today is the anniversary of the bombing that took place at the Boston Marathon last year.  Many of the people lining up to race today are doing so in honor of the 16 individuals that lost limbs to this horrific act of terrorism.  And two of those who were most badly affected got through this year because of the help of a wonderful service dog named Rescue.

Two people most notably affected by the bombing is a married couple.  Their names are Jessica Kensky and Patrick Downes.  There are many, many awful stories surrounding the events of that day, but their story is perhaps one of the most harrowing, and saddest.

They were not far from each other when the blast went off, causing both of them to lose a leg.  Their injuries were thought to be extreme.  They were among some of the last people taken to the hospital, because their chances of making it were very slim.

However, to every dark cloud, there is a silver lining.  This couple was about to find out just how complete their life could be through the help of one specially trained service dog.

Rescue, an 80-pound black Labrador retriever, is a specialist when it comes to being an assistance dog.

To get a handle on why Rescue is a big part of their lives, you need to get a better understanding of just how bad things were for Kensky, and the extent of her injuries.

“My whole Achilles tendon was blown off, a good part of my heel pad was blown off,” said Kensky. “But when I woke up, my left leg was already gone, and I couldn’t imagine losing my right.  And I just — it’s such a permanent decision. So I thought: You can always amputate it down the road, but once it’s gone it’s gone.”

Instead of going through with the amputation, doctors put Kensky’s right leg back together the best they possibly could.  This would be her “good” leg, if you really wanted to call it that.

“I don’t think I really appreciated what chronic pain means and how it just — it rules everything,” she said. “When you have that level of pain with every single step, you don’t want to take it.” 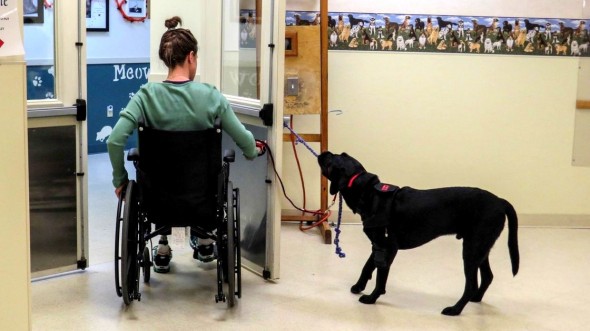 The chronic and consistent pain she was feeling had her asking herself a very difficult question.  One that would not exactly be the easiest, or at all painless one to answer.

“I didn’t know what it was going to be like to try to walk on something and live with a leg like that,” Kensky said. “Now that I know, I’m always in the back of my mind wondering if I would be better off with an amputation.”

This is where Rescue comes in.

Rescue was adopted from a not for profit group called NEADS (National Education for Assistance Services).  They specialize in training assistance dog for people with all kinds of disabilities, and after the tragedy of the bombing, NEADS is offering free service dogs to any of the victims with a permanent physical disability.

Due to continuing issues with mobility, Kensky decided to take NEADS up on their offer.  She was one of the first victims to do so.  Now, it doesn’t matter if she is walking with her new prosthetic or with crutches – Rescue is right there to steady her the whole way.  However, steadying Kensky is not all he does.

Rescue has learned many different commands that make life just a little bit easier for Kensky every day.

“Come on – nudge!” she tells him.  This gets Rescue to hop up and hit the elevator button in Downes and Kensky’s now more handicapped accessible apartment building.  If Kensky drops something, say her keys, all she need to is give Rescue the command to fetch, and he’ll gather them up and bring them right to her.  He’s also learned how to open doors, and is even able to grab and bring over a ringing telephone, even if there is the occasional accidental hang up, or pressing of a few buttons on the way, he still makes a great effort of it. 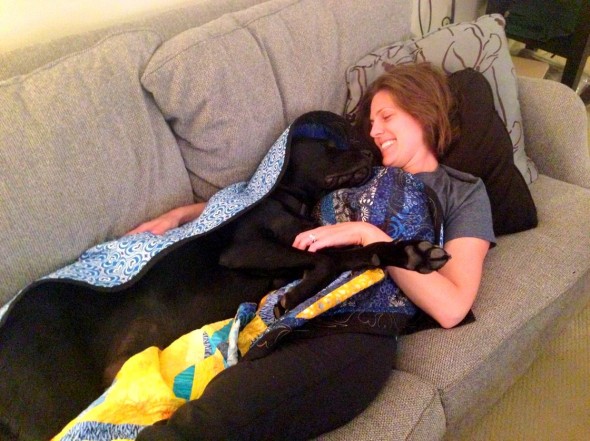 Kensky and Downes also say the Rescue has helped them to remain physically active people, which is of course something that can be hindered by being an amputee.

Other than just the physical toll all of this has taken on them, the mental toll can be just as steep sometimes.  Kensky is only 33, and she’s be unable to return to her job as an oncology nurse.  Downes is only 30, and has been forced to drop his dream to go for a pre-doctoral program in San Francisco, where the couple was planning to relocate.

Along with the loss of limb, they also suffered shrapnel wounds, and have had perforated ear drums.  They have had upwards of 30 surgeries between them, and there are still more to go.  And even though Rescue is a service dog, there are also the intangibles, the companionship and all of the other things that having dogs in our lives greatly improves.

“To have a dog like him around, you laugh 10, 20, 50 times more a day, and you can’t help but have that lift the mood,” said Downes. “And he’s a huge cuddler … he’s just constantly giving us hugs and kisses and entertaining us, and he’s a wonderful gift in that way.”

“That week he came, for the first time, I started sleeping through the night,” said Kensky. “We would be up, 3, 4 in the morning, sad, depressed, anxious. Not that I don’t experience those feelings any more, but it was incredible to sleep through the night. And, I mean, I have to attribute it to him. He was the change.”

Rescue has brought much more to the lives of Kensky and Downes then just the obvious assistance he has been trained to provide.  The love and compassion that a dog can show is second to none, and often does wonders for individuals that are sick, injured, elderly or just plain lonely.

A dog’s love and company can brighten and enrich anyone’s world, and help them feel that despite what may or may not happen to us in life, our forever friends will always stick by our side, ever ready to lend a helping paw, or even just a listening ear and a hug.  Speaking of hugs, one other command that Rescue has got down pat with almost no training at all is “give me a hug.” When asked, he immediately gives Kensky a nice big doggie hug.