Submitted to The Animal Rescue Site by Cherry McKimmey of Torrington, WY.  In addition to featuring fan-submitted rescue stories, they also sell a wide variety of clothing, jewelry, pet supplies, office supplies, and home décor.  For each purchase made, a food donation is made to shelter animals. (Click here to shop.) 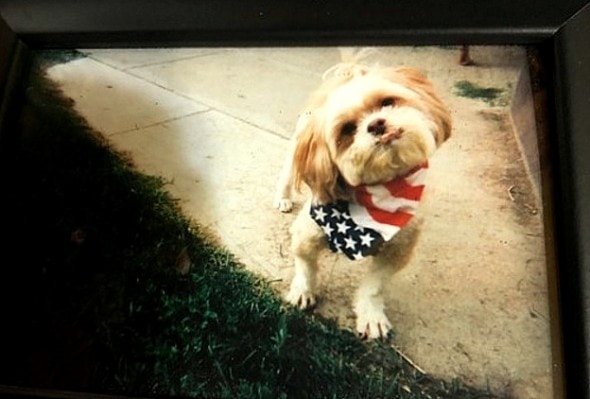 In October 2004, my mom died. As you would expect, I was struggling and then one night my neighbor called and told me of a little dog she had seen posted on a rescue. She knew about the little guy because I had heard some friends had taken him to the rescue because he wasn’t good with a small child in their family and was too “quirky.”

The little Lhasa Apso was named Marley. We both knew this rescue wasn’t a good idea and once I saw the posting I was determined to save him. The little dog had had his hair chopped off and was wearing a muzzle. The look on his face was pure terror. I immediately put in to adopt him. Marley joined our family on Christmas Eve, complete with his own box of antacids! His eyes were blood red and our vet determined the “rescue” had been using a snare to drag Marley from his kennel.

Marley was a quirky little guy doing things his way, chasing his tail, growling and watching shadows and could lay for hours, staring at the wall. We just let him be himself and eventually, he started jumping on our laps and giving hugs. Over the years we treated Marley for his stomach issues, sight problems and dementia like behavior.

In October of last year, at the age of 16, the problems were obviously getting worse and Marley’s vision was totally gone. He knew and so did I that maybe it was time to end the fight. Marley crossed over the rainbow bridge that day, safely tucked in my arms. He was finally at rest. I always believed mom had played a part in our getting him to ease us through the pain of losing her and he had done that. I miss my Marley….. I still hear him growling as he ran up the hallway to our room where he slept on our bed. Special Marley had finally found a home where someone loved him because of his quirky differences. We wouldn’t have wanted him any other way.

1 thought on “Marley, The Little Man No One Wanted”