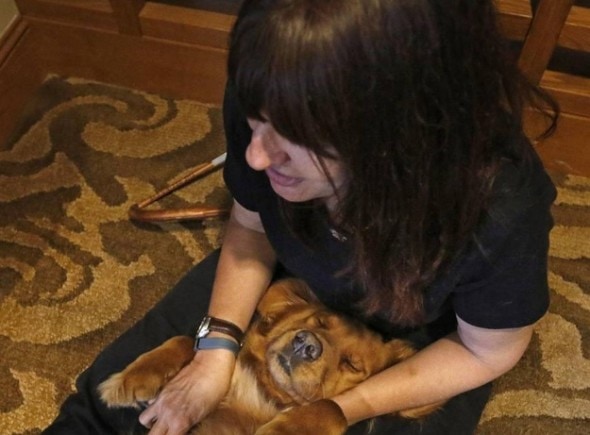 Service and therapy dogs have a lot on their plates.  They have humans that depend on them many times a day to do basic things, all while attempting to ignore every impulse they may have to “dog.”  Carla Campbell thinks that dog massage therapy may be key to helping the helpers unwind a bit.

“He’s letting go nicely,” said Carla Campbell as she gently worked the dog’s back and legs.  “He really needed this.”

Carla is at the conference of the American Council of the Blind in Dallas, Texas.  She talking about Merrick, a dog there with his human at the conference, and tensions may be a bit higher with all the other dogs around.  She’s trying to show how a bit of massage therapy can really calm things down for them.

“This is probably the most stressful environment these dogs will ever have in their career,” said Carl Richardson of Boston. Carl is Merrick’s visually impaired human.  “It’s good to give them a little break and let them relax.”

Carla is blind herself.  She lost her sight to glaucoma, and decided to quit her job as a tech support assistant, and pursued a job in canine and equine massage.

“Getting yelled at for a living was never my dream job,” she said.  “And I always thought I’d be working with animals.”

Carla has been perfecting her craft ever since then.  She usually treats about ten dogs a day at a conference like this, but her record is 17.  There are many regulars to the conference that trust Carla and her therapy to help their canine helpers relax.

“All that focus makes you tense up, just like it does humans,” said Carla.  “It helps to have that time out where you can physically relax.”