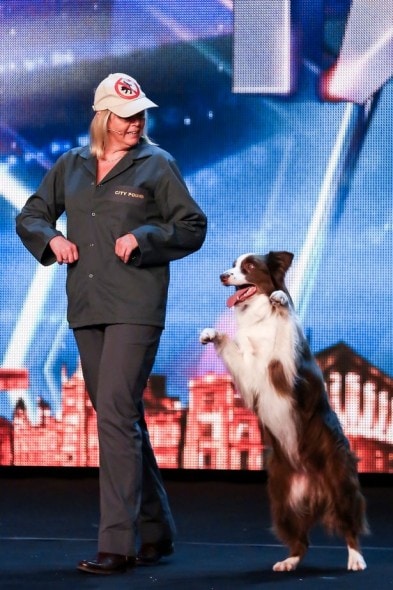 Even though you may not watch television shows like American Idol or Britain’s got talent, but most people are familiar with Simon Cowell.  Known for being a bit of a curmudgeon at times, you don’t often hear about him really being impressed by anything.  However, after he and the other judges on Britain’s Got Talent saw Matisse’s routine, everyone was wowed.

If you caught the episode live, or watch the video all the way through, you’ll get to see the man once dubbed “Mr. Nasty” go all soft over a dog.  He was even doing baby talk, and blowing kisses to the dog after the performance.

To be fair, this was one heck of a performance.  The amount of time it had to take to get that down flawlessly had to be astronomical.  Matisse and his human Jules O’Dwyer were spot on with every move they made, and all of that effort really showed when they took to the stage.

O’Dwyer said that she has aspirations for Matisse to one day have his own children’s show.  A concept that some, Mr. Cowell in particular, might have found quite outlandish.  That is until they witness Matisse do what it is he does best.  Then the decision seems like a real no brainer.

After all was said and done, all four judges agreed that Matisse was moving on to the next round.  This is definitely not the first time we’ve seen Mr. Cowell go all soft over a dog.  It would almost seem as if he has more love and tolerance for dogs than he does other humans.  Something that is not quite as rare as one might think.