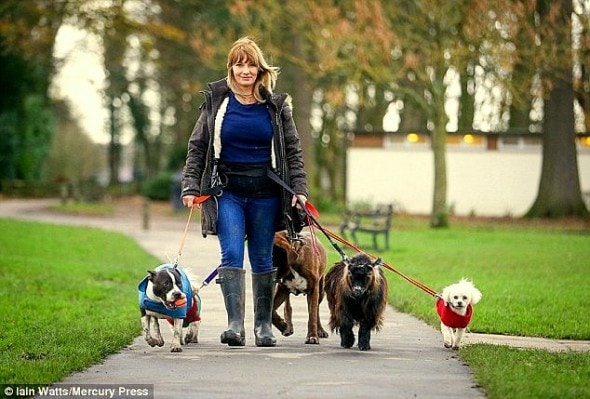 Based on every internet video, the best things about being a goat are head-butting and spoinging.  But Hobo would rather hang out with his dog friends and curl up on the couch with his human mom.

“He is a quirky little boy, I genuinely think he has no idea he is a goat and thinks he is a dog,” Tracy Flowers told the Daily Mail.  “I have two other goats but they are nothing like Hobo – they act like actual goats, but he is happiest when he is with the dogs.”

When the African pygmy goat was found wandering the streets of Chorley in the UK last year, Flowers, and animal lover and doggie daycare owner, just knew she had to give him a home and nurse him back to health.  She already had a parrot, two ferrets, two pygmy goats, four cats, five dogs, and fourteen chickens, but what’s one more goat? 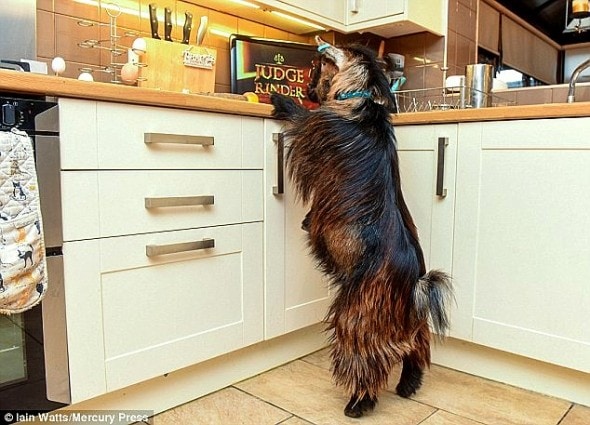 In addition to running The Dogs Barracks, Flowers has fostered hundreds of pups with Rochdale Dog Rescue, so helping a stray recuperate isn’t a new challenge.  However, Hobo didn’t end up where she’d have thought.

Strangely enough, he really didn’t take to the other goats.  (Maybe because he was found with matted fur and snapped-off horns, he thought the other goats would tease him.) Rather, he preferred to keep canine company.

So she appealed to the Department for Environment, Food, and Rural Affairs for a special permit allowing her to walk Hobo in their local park.  He’s one of only a handful of goats in the country with the privilege to do so.

“Hobo now comes out for a walk with the dogs every day and he will obediently stay with me even if he is off the lead,” she said. 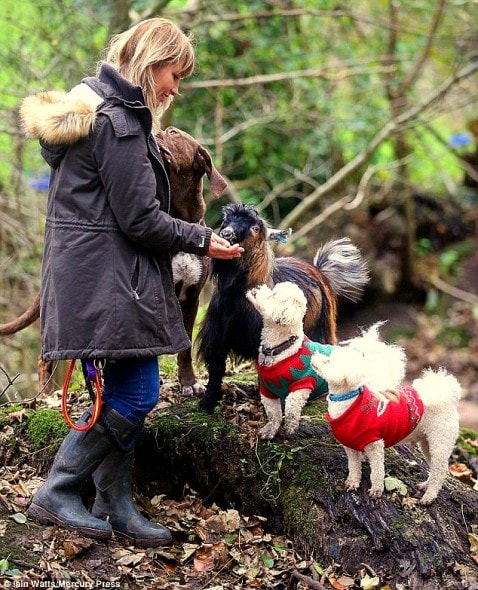 “He expects to go out daily now and if I ever miss a day walking him he starts bleating, leaps out of his pen and comes looking for me in the house.

“The looks we get when people walk past and realize there’s a goat ambling along in the pack are priceless.

“Most dogs he meets come over to sniff his behind and don’t seem to realize he isn’t a dog.

“And some people don’t even realize he’s not a dog – one lady came over to me and asked, ‘What breed of dog is that that looks so much like a goat?’” 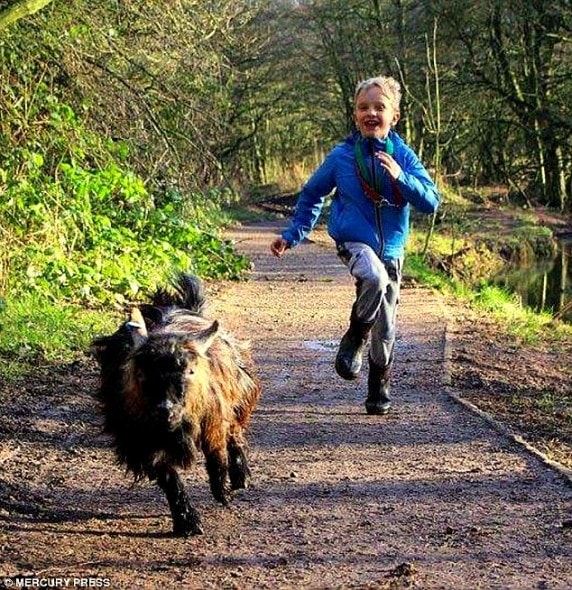 Though Flowers says she’d love to keep him in the house full time, she simply can’t, because goats poop everywhere.  A LOT.  He lives in a pen in the yard with the chickens, but is sometimes allowed into the front room to snuggle up and watch TV.

Hobo even gives little kisses, and will beg with the rest of the dogs for dog treats.  Unable to completely overcome all goat instincts, he will bounce onto the kitchen table whenever he can, and takes every opportunity to raid the veggie rack.  Despite his incorrigible caprine behavior, the little darling is a permanent member of the family.

“Hobo is such a character, and has a hilarious sense of humor.  He is so much fun and is a massive part of our lives now.” 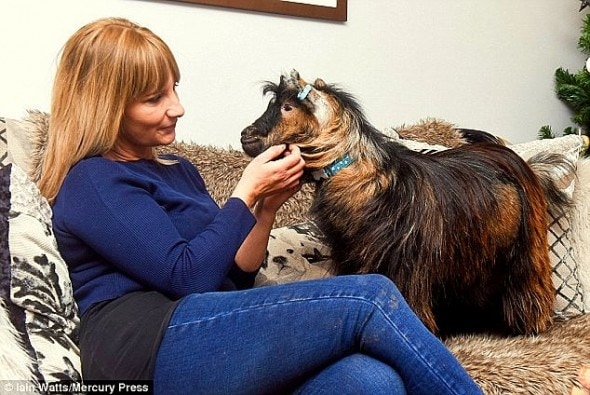