The following comes from the Trio Animal Foundation (TAF), an outstanding rescue group: 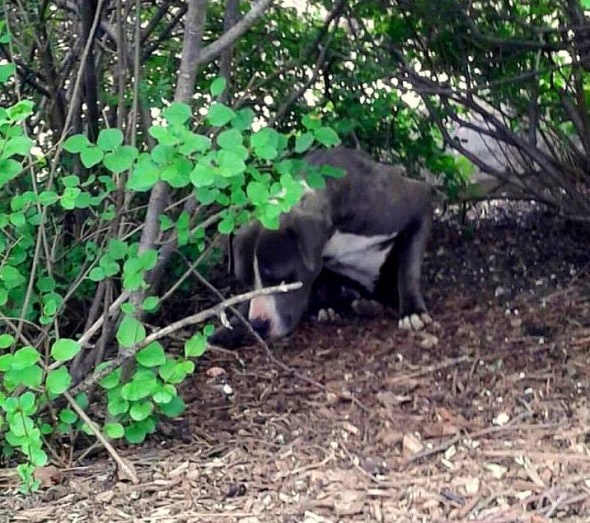 It was about a week before Memorial Day when Merit’s lifeless emaciated body was first spotted under the lilac bushes in Chicago’s Grant Park. It was initially thought that it was too late and that Merit had passed away before help could arrive. However, when Merit noticed the water that the kind staff of Lakeshore Athletic Services had set out for him, he lifted his head and let them know that he had not given up.

For the next few days, LAS set food and water out for Merit until one of TAF’s most trusted friends, Katie, went out to catch Merit with a humane trap. Once Merit was caught, TAF worked with Katie to get him the emergency medical care that he needed.

When Merit was initially brought in to the hospital, he was dehydrated and suffering from severe diarrhea caused from rocks and sticks trying to pass through his intestines and rectal area. In addition to this, Merit had over 50 ticks removed from the inside of his ears. It would soon be discovered that even more ticks were lodged down deep in his ear canal causing him a tremendous amount of pain.

After showing no signs of improvement after of week of supportive care, Merit was diagnosed with a tick-born-illness. In hopes of stabilizing his system, Merit continued to receive subcutaneous fluids, pain medication, antibiotics and medication to help stop the diarrhea and sooth his stomach.

It has been about two months now and TAF has been working with Merit to help him heal both physically and mentally. As it turned out, Merit LOVED other dogs and would light up when he saw the dogs from TAF’s Canine Rehabilitation Team. This was a big surprise to us as he was so antisocial in every other situation with people. Merit never showed any signs of aggression towards people but instead liked to be more of a loner. He would wag his tail when he saw you but wasn’t the type of dog that would seek you out for affection.

Just to make sure that we were reading Merit’s behavior correctly, we had him do a board and train with one of the best trainers in the city. After spending a week with Merit, his trainer said that she trusted him in every situation but that he was the type of dog that just wanted to watch from afar and not socialize in the way that most dogs would. 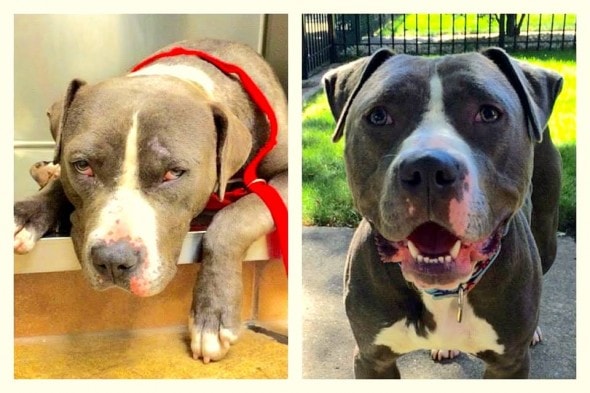 Unsure what the outcome would be for a dog such as Merit, we decided to take a leap of faith and put Merit up for adoption. Almost immediately, we were contacted by a single mom who had a ten-year-old son who was born with Down syndrome and was autistic. She said that at age six her son was diagnosed with autism and has not spoken since… he now only makes noises.

The woman was looking for a companion for her son as he does not like to be around people. She also needed a dog that would not jump on him and one who wouldn’t be too disruptive to the routine that is necessary for her son. The hope was that Merit and her son would provide each other with the no pressure companionship that they both needed. The kind of friendship and loyalty that only a dog could provide.

This past week, the woman came to meet Merit to see if he might be a good fit for her son. It did not bother her that Merit did not run up to greet her as most potential adopters would… she appreciated that which made Merit different. In fact, it made her like him more.

Within days, Merit was brought over to meet the woman’s son to see if there was connection between the two.

When greeted at the door, Merit left Bridgid’s side and for the first time was confident enough to walk in on his own. In a scene straight out of a movie, Merit walked straight to the couch and sat next to the young boy. With no words said, the boy gently patted Merit on the head and put his arm around him. They sat quietly together and it was as though they had picked up where they had once left off… an unspoken connection between two souls. Whether you believe in a higher power or not, there is no denying that something very special happened at that moment.

With his mom and grandma by his side, Merit found his purpose and a little boy found his best friend… it is truly a match made in heaven. 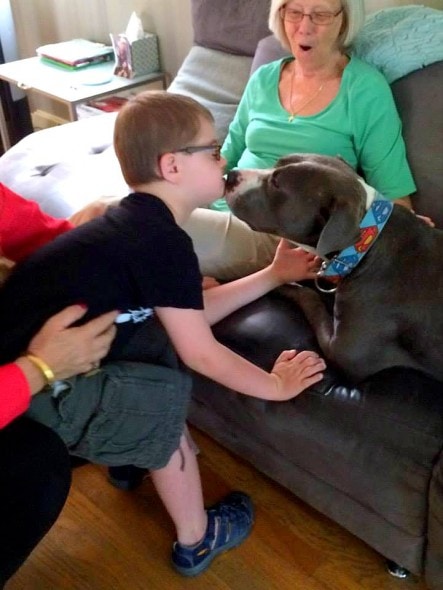