On July 28, 2014, Jeff Kopp was walking his dog Bobby near the Diamond Lake area in Michigan, and thanks to the dog’s stubbornness to walk towards a certain area, a newborn baby girl who had been abandoned in the bushes was saved.

Kopp and Bobby go out every morning, but on that day the dog insisted on walking an unusual route. Around 10:30 a.m. the dog pulled his owner towards a satellite dish along some plants, 3-feet off Marion road.

“He brought me over and [that’s] when I saw what looked like a rabbit at first,” Kopp told Wood TV. 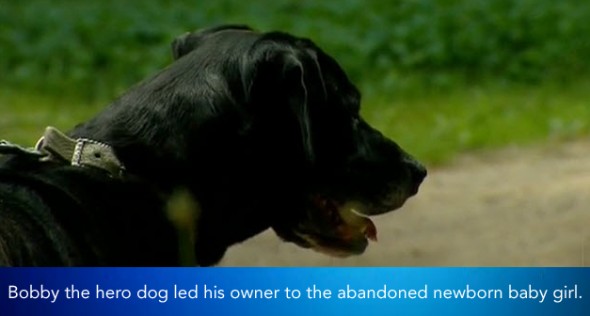 The hero dog sniffed the “rabbit” and when Kopp took a closer look, he realized that what his dog sniffed was a newborn baby instead.

“Then it moved. That’s when I started yelling,” he said.

The man was shocked to have found a little baby on the side of the road. He screamed, calling his wife, daughter, and neighbors, and asked them to call 911.

“He hollered for myself and my mother to get a blanket or a towel because he just found a baby,” said Cathleen Neal, Kopp’s daughter.

The newborn was a baby girl and she was laying on her side in the fetal position. Her umbilical cord was still attached. She wasn’t moving but when Neal picked her up, the tiny girl started to cry and move.

“It was a relief to me [to hear her cry] because I knew she was alive,” said Neal.

An ambulance transported the hours-old baby to Gerber Memorial Hospital in Fremont, Mich. Authorities later found the baby’s mother, a young teenager from the area, and she too was taken to the hospital for evaluation.

Neal said the newborn’s mom was present when the ambulance and authorities showed up, but the young mom acted as if she didn’t know anything about the abandoned baby.

It is unknown if the underage mom faces criminal charges, but area residents – especially Kopp – are grateful Bobby discovered the baby.

Kopp says the little girl is alive and well today thanks to divine intervention.

“I tend to think it was God [who] led us that way. All life is precious to Him,” said Kopp.