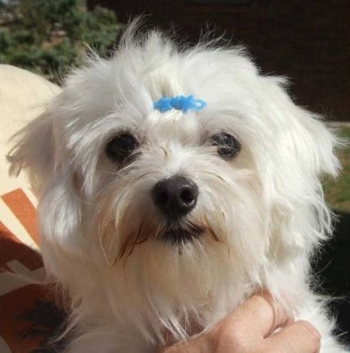 A violent car crash took the lives of Monica Benson’s husband and daughter in June of last year, and until this week, it was believed that the family dog had also perished in the accident.

Shortly after the crash, family members scoured the area searching for Caesar, but the dog was nowhere to be found. With the passage of time came acceptance of Caesar’s loss as the family focused on healing – but Benson’s youngest son was not ready to say goodbye to his four-legged pal.

18-month old Benjamin Benson was placed in an Intensive Care Unit at an Amarillo hospital after surviving the accident. “While Benjamin was in the ICU, we placed a picture of him and Caesar on the walls.” Monica Benson told the Quay County Sun. “When he woke up he would point at the pictures and say Caesar.”

Sadly, Benjamin’s concern for his dog did not wane when he was sent home. “It has been so hard,” Monica Benson said. “There are pictures all over the house and Benjamin would point at them and ask “where’s Caesar?”

On Friday, Christina Flemming, a member of the Tucumcari Animal Rescue Group, answered that question when she found Caesar in the Tucumcari animal shelter during a routine weekly visit.

Flemming went to the shelter looking for candidates she could pull for adoption. Seven dogs were chosen that day: all were taken to a local vet for microchip scans. “There was a chip implanted in a cute little Maltese we had named “Prince Harry,” Flemming said. “I called the chip contact and was given a phone number for a woman in Michigan.”

The number was disconnected. Flemming said a gut instinct prompted the internet search that would eventually lead her to the Benson family after she read an online article about the family, the crash, and their lost dog. “I found the obituary and contacted the funeral home in Michigan,” Flemming said. “A woman named Rhonda helped me to get in contact with Caesar’s owners.”

Flemming and Benson worked out travel arrangements for Caesar, who will return next week to much fanfare. Benson says said her four surviving children have been celebrating the good news, and are making welcome home posters for Caesar.

“This has been the best news we have received in a year,” Benson said. “Words can not describe how much this means.”