As well as being an accomplished actor, Mickey Rourke is also a huge dog lover. Last year while filming the thriller Dead in Tombstone in Romania, a stray dog wandered onto the set, and Rourke adopted her and called her Foxy. The sheer number of strays and their abysmal quality of life left such an impression upon him that he vowed to help more than just one.

So now Rourke is founding a sanctuary for the over 100,000 dogs that suffer on the streets or Bucharest. He has a goal of $2,000,000 is donating the first $250,000. There aren’t many more details known at this early stage of planning. There may be a spay/neuter program in place, which would greatly minimize the number of future dogs.

Rourke will visit Romania as often as necessary to oversee the sanctuary’s construction. Right now he is working on the acquisition of a piece of land that could sustain a football field-sized shelter. He is also warning away potential investors who are hoping to make money from this endeavor.

“Nobody will make any money from this investment,” Rourke declared. 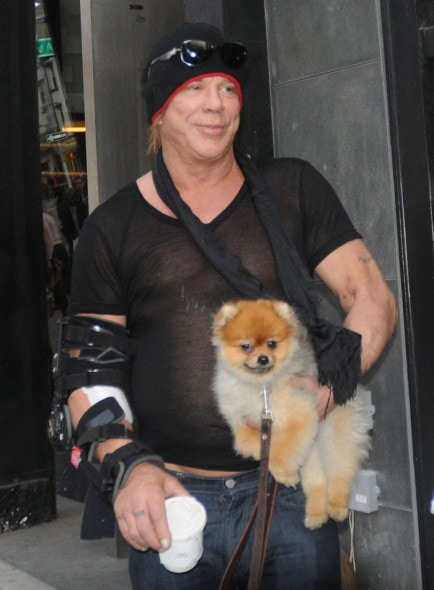 His love for dogs goes back a long way; he even shouted out to “all my dogs” in his 2009 Golden Globe acceptance speech for his performance in The Wrestler.

“The ones that are here, that aren’t here anymore, because sometimes when a man’s alone, that’s all you got is your dog. And they meant the world to me.”

He also believes his dogs, including Chihuahua Loki, who passed away in 2009 at age 18, helped him get through depression.

“I think I hadn’t left the house for four or five months, and I was sitting in the closet, sleeping in the closet for some reason, and I was in a bad place. And I just remember I was thinking, ‘Oh, man, if I do this,’ and then I looked at my dog, Lowjack, and he made a sound, like a little, almost human sound. I don’t have kids, the dogs became everything to me. The dog was looking at me going, ‘Who’s going to take care of me?”

Rourke did, and will continue to do so for as many dogs as he can.