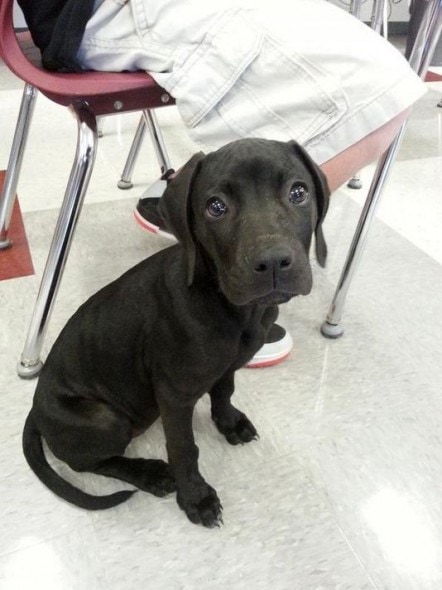 At Heritage Middle School in Newark, Ohio teamwork is the name of the game.  Teachers and staff often have the children get together to do some problem solving.  This past Monday, they had their skills really tested, and did a very nice job indeed.

Most of the time, the students focus on team building to solve problems related to the classroom.  However, when a 9-week-old puppy was discovered following the kids to school, they came together to do whatever it took to make sure the puppy was reunited with it’s owner.

It didn’t take long until the teachers had caught wind of the little pup.  Almost all the students were talking about it, so Math teacher Anji Villa went to investigate.

Villa could tell straight away that the dog had to belong to someone.  The puppy was clean and well fed, and she knew someone was missing her.

Mat Dunham is responsible for making sure Heritage Middle School’s social media sites are updated and maintained.  When Villa brought the pup to him, Dunham posted a found notice to the schools Facebook page.

“I was hoping one of our community members would see it or share it and we’d get her back home,” said Villa.

The students then too the pup to Villa’s classroom, and made sure she was comfortable.

“She made her way around the classroom and they gave her some love,” said Villa.

While students and staff were taking care of her, the post on the schools Facebook page had been shared 25 times before the dog’s humans were located.  It turns out that the mother of the puppy’s human mom saw the post, and quickly called her.

At lunchtime, the puppy and her human mom were reunited.  She was so grateful to her dog back, and thanked the students and staff for making sure she was well looked after.

The students were all too happy to have helped out, and were glad that there was a happy ending.