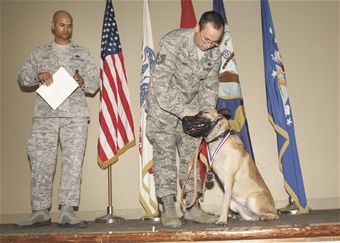 Layka has become the first canine to receive an honor from the 341st Training Squadron, the organization that trains dogs for the military. The 3-year-old Belgian Malinois is being recognized for her heroism in Afghanistan this summer.

Layka was working with a U.S. Special Forces unit in Afghanistan when she was dispatched to inspect a building. While searching the building for explosives and enemy combatants Layka was ambushed by an assailant. She was shot in the abdomen and right front leg but continued to protect her team members. Even with her gunshot wounds she attacked and subdued the assailant. Layka’s actions helped prevent multiple casualties.

Layka was treated by her handler and a physician’s assistant before being flown to a hospital where she underwent several surgeries. She lost her right front leg, but is otherwise recovering well.  She no longer can serve and has been adopted by her handler, who is one of the many soldiers she helped save. “He’s very excited to get her and thankful he had her that day,” said Maj. Jason Harris.

Layka was presented with a medal of heroism  on September 12th from the 37th Training Group. “The medal is unofficial because no decoration exists for military working dogs, but we felt Layka deserved recognition,” said Maj. Harris. “What these dogs do, day in and day out, is phenomenal. They do save lives. Layka was shot and still attacked the person shooting her. She’s been through a lot, and what she did is nothing less than heroic.”