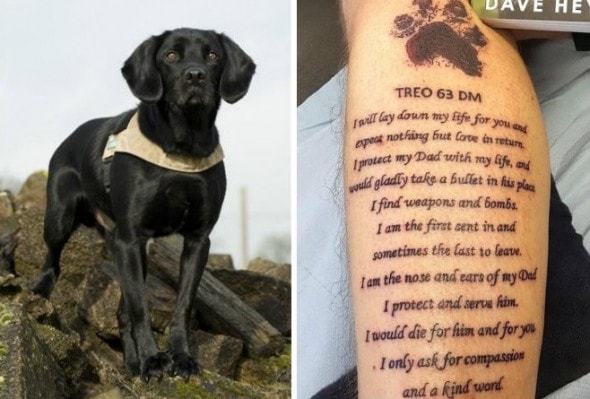 We have reported here at Life with Dogs on many of the special bonds that are shared between people and their dogs.  No one understands this bond perhaps the same way a K9 handler does, and when that handler says their final good byes to the dog they brought up through training, it often results in very touching moments.  So when Sergeant Dave Heyhoe had to say good bye to Treo, he wanted to do something special.

Sgt. Heyhoe and Treo worked together overseas as a bomb-sniffing team, keeping their fellow soldiers as safe as could be given the circumstances.  They worked together up until Treo’s retirement, and when Heyhoe learned of Treo’s passing in October of 2015, it was devastating.  His entire family felt the loss. 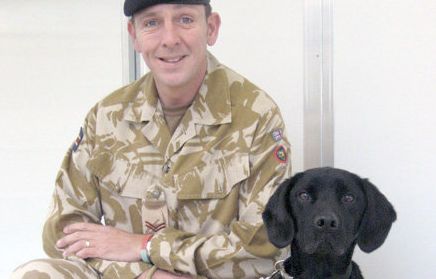 That’s when Heyhoe decided that a special commemorative tattoo was in order, but not just any old tattoo would do.  He found out that there is a process of mixing in cremation ashes into the tattoo ink, so that he and the dog he loved and trusted so much would be with him forever, no matter what anyone did!

“The tattoo completes me,” said Heyhoe.  “People might think it’s strange, but Treo was like a son to me, and his death his knocked me for six.” (If you aren’t familiar with Anglo-slang terms, being “knocked for six” means totally devastated.

So, what do you, the readers, think?  Is mixing cremains into tattoo just kind of weird and gross, or a touching, everlasting tribute to someone you truly loved?  Would you do it?  Let us know in the comments, or share your stories with us on our Facebook page.