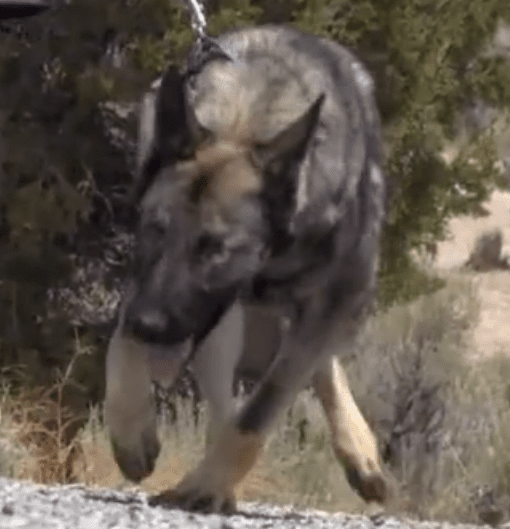 Asur dedicated his life to serving in the military. The former bomb-sniffing dog served with the U.S. Marines but his work caused him to lose his sight. Now Asur is adjusting to his new life.

Asur heroically served with the U.S. Marines. After about a year in Afghanistan he became disabled and no longer could serve. Doctors believe the chemicals from sniffing bombs caused Asur to lose his eyes. Asur was brought back to the United States, but didn’t have a home.

Hounds and Heroes, a non-profit organization that helps pair rescue animals with men and women in service came to his aid. Bonnie-Jill Laflin is the founder of Hounds and Heroes and Asur’s new family. Laflin has been helping Asur adjust to his new lifestyle. Not only has Asur had to adjust to life without his vision but he has had to adjust to no longer being a working dog.

“You go from military environment, in kennels and Humvees, he’s all over the place and now he’s turned into somewhat of a couch potato,” said Laflin.

While Asur is doing very well adjusting to being blind, adjusting to life as a couch potato is a little harder.

“He is a protection breed and he’s used to biting and tugging and playing,” said dog trainer Melissa Heeter. “We’ve got to find new ways to show him that he can still be a dog and have a fulfilling life.”

The Laflins have a large ranch in Nevada for Asur to enjoy. It will just take some time for him to adjust so he can fully enjoy it. The Laflins and Heeter are happy to take the time to help him get there.

“He has given his life basically to the United States and now we’re giving back to him,” said Heeter.