Bad cops like abusing their power, but when they are caught in the act, they must pay the consequences just like regular criminals do.

On June 14, 2015, Brett Arthur Berry, a Minnesota deputy was caught on security cameras abusing his K9 partner, Boone, while the two of them attended a K-9 certification event in Carlton County. 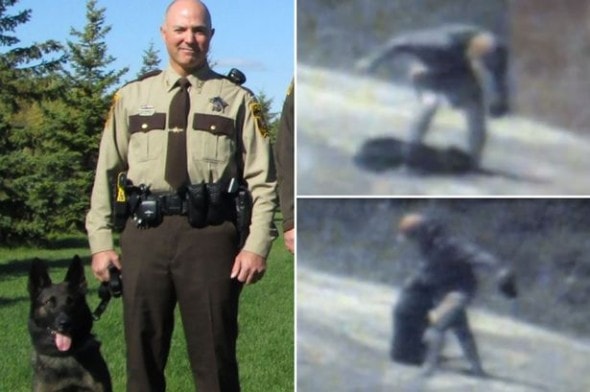 The training event was held at Black Bear Casino and the security system caught Berry leading his four-legged partner outside where he picked up the animal by the neck and slammed him onto the floor.

Boone ran away from his abuser but was caught between two doors. Berry caught up to the dog and proceeded to punch the pet six times.

Fortunately, the casino’s security team reviewed the tape a few hours later and called authorities to report the abusive deputy.

The K9 officers did no suffer any physical injuries from the abuse. He is no longer living with his abusive partner.

Berry is on administrative leave and if convicted, faces up to 90 days in jail and a $1,000 fine for each of the two animal abuse charges.

Lets hope he pays for the abuse he inflicted on Boone.