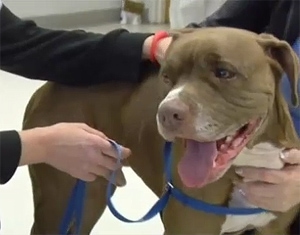 Think you are having a bad day? How would you like to be Solo? The Lake Charles dog is recovering at home after surviving two near-death experiences in one day. The pit bull somehow managed to slip through the fence of his owner’s property on Saturday morning. He was subsequently struck by a car, and for reasons unknown (perhaps fear or confusion) found his way to a nearby beach, slithered into the water and drowned.

Calcasieu Animal Services control officer Angela Sullivan was on duty and received a call about a dog that had been hit by a vehicle. Sullivan received another call from someone who said the dog had crept over to the I-210 beach at LeFleur Park.

“And when we get there we speak to them and they tell us ‘Oh the dog just drowned.’ And we’re like ‘What do you mean the dog drowned,” recalled Sullivan. “We took off all of our equipment, went out into the water and took the dog out.”

When they recovered Solo he wasn’t breathing. “He was ice-cold,” said Sullivan. “We performed CPR on him and were able to get a heart beat.” Solo started breathing on his own and was rushed to Lake Area Animal Hospital, where doctors were able to treat and stabilize him before returning him to his family.

“Not knowing if we would ever find him was really disheartening,” said his owner, Sandra Woodard. “Then to get there to the vet’s office and have him walk in was miraculous, just miraculous.”

13 thoughts on “Miracle Dog Run Over, Drowned and Revived in One Day”