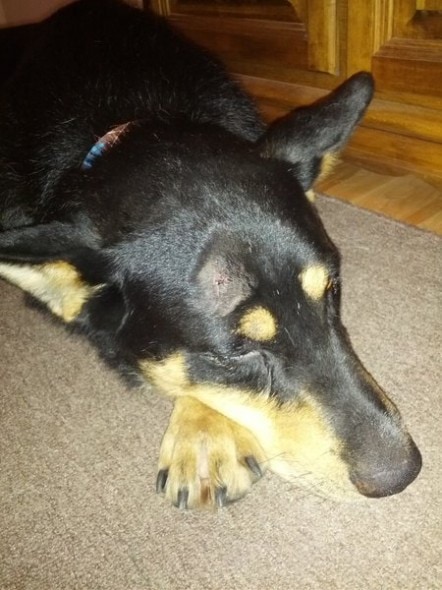 A stray Kansan dog found himself a home last weekend after narrowly escaping death.  The Shepherd mix, named Titan, had been wandering around the Flat Ridge 2 wind farm in Harper county.

“He was just hanging around, and people were giving him scraps of lunch and whatever else,” crew member Stephanie Babcock said.  “He was just a sweetheart of a dog.”

Then Titan vanished.  A few days later he returned, badly wounded.  He had been shot in the head, and the bullet traveled through his mouth, tongue and throat.  Babcock called a veterinarian.  Surgery to remove the bullet and repair damages was successful, but Titan is now blind in his right eye.

It is unknown who shot Titan, or why.  But through this misfortune shines a ray of happiness.  Babcock contacted local news stations with his story.  Soon, a Wichita family heard and decided they wanted to adopt him.

“I have a soft spot for canines,” said Summer Magyar.  “Seeing the pictures and hearing the story were heartbreaking.”

A fund for Titan’s medical procedures and future bills has been established at the Swaney Veterinary Clinic in Kingman, KS.  Any extra money will be donated to the local Humane Society.