Animal lovers in New Zealand are celebrating the story of Been, a dog shot in the head three times and left for dead. A pig hunter happened upon the dog in the Wairau Valleyand and contacted rescuers, who said the injured dog survived at least two days in the wilderness after sustaining three closely spaced gunshot wounds to the skull – indicating an intentional shooting. Been was also more than twenty pounds underweight when found, but is recovering nicely and is packing on pounds in his new home. 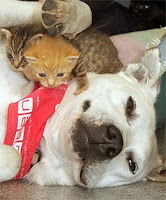 An employee of the Nelson SPCA fell in love with Been while caring for him during the recovery process, eventually adopting him. He is deaf; a condition his new owner, Jaine Reynolds believes to be hereditary, and not the result of injury. Been is now passing his days in the Reynolds home with Max, (the family pooch) and two adult cats, and is currently helping to care for four kittens rejected by their mother. According to Reynolds, Been waits for the cats to be fed before bathing each of them and tucking them into a basket to sleep with him.