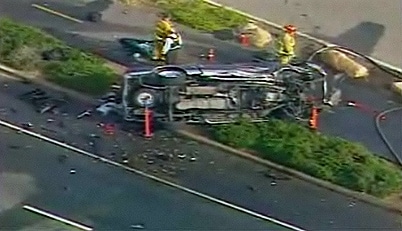 A dog seen flying from the wreckage of a deadly Coronado, California traffic accident is being treated for a possible broken elbow at the Chula Vista Animal Care Facility, but is in remarkably good condition otherwise.

The accident took place shortly after a female suspect carjacked a couple as they were washing a pickup truck. The woman who owned the truck backed away from the knife-wielding car thief, but the man and the couple’s dog were still inside the vehicle as the suspect sped off.

Sheriff deputies spotted the vehicle in Imperial Beach and pursued, but the chase lasted less than five minutes. Speeds were estimated to be as high as 85 mph.

The female suspect lost control of the truck along Silver Strand Boulevard and flipped it as nearby cars collided in an effort to avoid the speeding vehicle. “The driver leaves Imperial Beach exceeding speeds of probably 80 mph, comes here to the Silver Strand weaving in and out of traffic,” said sheriff’s spokesperson Jan Caldwell. “We believe the truck hit the little red car and flipped.”

The truck was on fire when rescue workers arrived. The suspect was found dead in the driver’s seat, and the man’s body was found in the backseat of the cab, Caldwell said. 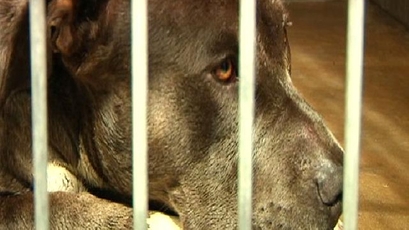 “It was horrible. Fire. A dog flew by. It was very scary,” said one witness who was driving a carpool of five children to school.

Chula Vista Animal Care manager Mariya Anton said the dog was examined by a veterinarian and is being treated for what may be a broken elbow. Surprisingly, no other injuries were noted.

“But he seems to be healthy,” Anton said. “He’s 60 pounds. Good weight. Good spirit. We’re just going to take it from there. He’s in a good place now. We’re going to take care of him.”