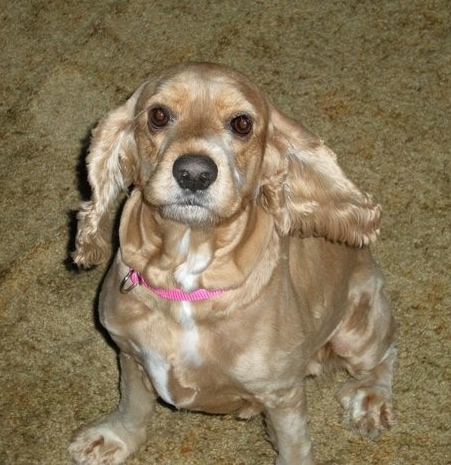 Johnnie Richey adored his 9-year-old blond cocker spaniel, Sugar. The 52-year-old Joplin man was killed in the tornado that leveled the area in May, and his family spent five difficult days searching for him before learning of his death.

Shortly thereafter, Richey’s sister, Kerri Simms, began a new search: Sugar had gone missing in the storm, and Simms was determined to find her brother’s lost companion before it was too late. She put up missing posters and started a Facebook campaign to locate Sugar, but despite her best efforts, there was no sign of the lost dog. After many weeks passed, it seemed that the odds of Sugar coming home were nil.

On Friday night that all changed when a part time taxi driver spotted a stray wandering along West Seventh Street. Chris Ruport picked up the pooch and took it home, something his wife said he would normally never do. “My husband doesn’t usually pick up stray animals, so there must have been something about her that said ‘help me,’” she said in an interview with the Joplin Globe.

Ruport went home that night and posted an ad on Craigslist with a photo of Sugar. Simms got word of the ad in a matter of hours and reached out to Ruport, who had mistakenly listed the dog as a male. Simms identified a unique growth on Sugar’s hind end over the phone and Ruport was able to confirm Sugar’s identity.

After making the drive to retrieve Sugar, Simms took her to a vet to be treated for dehydration, severe eye and ear infections, and flea infestation. Sugar was weak but is now recovering well, and Simms says that finding the lost dog was like forming a new connection with her brother.

“It means having part of my brother back,” she said. “We can’t bring him back, but we can at least have her. Now we don’t have to wonder. They wouldn’t let us see my brother after the tornado, so I don’t want to say it’s closure, but we know now that she’s OK.”

She urges those who lose pets to never give up. “I know there are a lot of pets still out there, and there may be people keeping them not realizing that the owners are looking for them,” she said. “All I can say to them is start with the fliers and keep looking.”