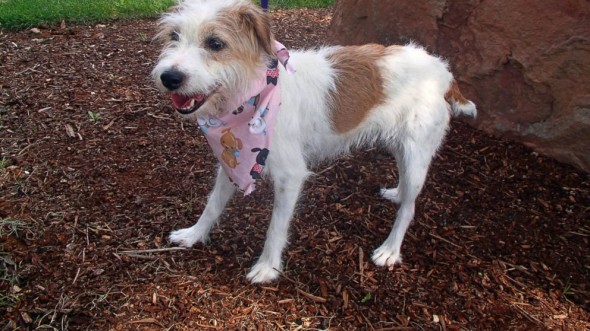 Gidget is a Jack Russell terrier that had gone missing from her home in Pennsylvania.  She has been found and now officials are scratching their heads trying to figure out how she got all the way to Oregon from her hometown.

Gidget had been spotted by a good Samaritan while she was wandering in Tualatin, which is not far from Portland, Oregon.  She was then brought to the Bonnie L. Hays Animal Shelter and placed in the care of Deborah Wood and staff.

Wood said that a check of the microchip embedded in Gidget indicated that her owners lived in Pennsylvania.  When her family was contacted, they couldn’t believe what they were being told.  Gidget had been missing since two days after Easter Sunday, and no one was sure they would every see her again.

Animal Services officials are still trying to figure out exactly how a dog from Pennsylvania made its way to the west coast.

“She’s never lived here; there is nothing that would bring her here,” said Wood.  “So a human somehow brought her here but we don’t know who or how.”

Was Gidget was brought in, she was a little thinner than maybe she should have been, but all outward appearances made people believe that she was in good health.  During the five months she’s been gone she may have lost the weight, but after some very good food, she’s back to a normal weight.

“Her eyes are shiny and she’s energetic and her fur looks great,” said Wood.

Now, her family and the shelter are working out the logistics for transporting Gidget home.  The owner doesn’t have the money to just fly out there and grab her Wood remarked, and the shelter doesn’t provide transportation.  A call for help was put out looking for anyone who is going from Portland to Pennsylvania to possibly take her home.

“I kind of see this as a Disney story,” said Wood.  “And we are very committed to the happy ending that we’ll figure out how to get her back to her home.”