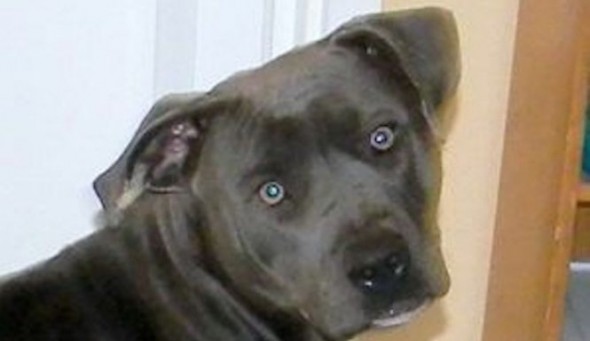 Joe Ann Navarro of Galveston, Texas was beside herself last year in May when her two pit bulls disappeared.  Months went into trying to find the missing dogs, but they were never recovered.  Now, one of the dogs has somehow turned up, but not in Texas.  The dog was located in central Indiana, about 1,100 miles from home.

This past Wednesday, Navarro got a phone call that she was in no way expecting.  One of the pit bulls, a female named Blue was actually found.  A stranger dropped the dog off at the Humane Society of Kokomo, which is about 40 miles north of Indianapolis.

Karen Wolfe, executive director of the Humane Society’s shelter in Kokomo said, “She’s a beautiful dog.  You don’t like every dog you meet, but I liked Blue.  She’s a sweet pit bull.”

When the person brought Blue into the shelter, staff checked her for a microchip.  She did have a tracker/locater chip, but after scanning it, it was found to have never been activated and registered.

The manufacturer of the chip was then contacted by Wolfe.  It was determined that the chip had been implanted in a dog from Texas.  They not only knew that, but still had it on record that the dog with that chip, should match up with Navarro’s information.

Now, it was a matter of transportation.  Navarro had recently lost her job, and was not able to afford a 34 hour round trip trek.  Thankfully, someone from the Galveston Island Humane Society will be bringing the dog back to her.

“I hope she remembers me,” Navarro said to The Kokomo Tribune. “It’s been so long, and she was a puppy when she left and now she’s an adult. I’m going to be so excited to see her.”