A Las Vegas family is celebrating the return of their lost Corgi after spending more than four thousand days apart.

Michelle and Kipp Blauer bought Duncan, a corgi, for their two boys 11 years ago. And then he vanished. “Then one day he was gone, just disappeared,” Kipp said. 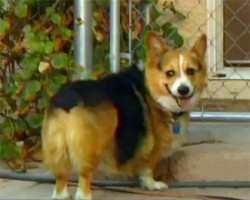 The family searched the neighborhood and local shelters, putting up fliers and hoping for good news. As time passed they were forced to accept the fact that they would likely never see Duncan again.

Thanks to a microchip, they were eventually proven wrong. “I got a call from this lady in Missouri and she says I have your dog, and I’m like ‘what dog?'” Kipp said.

Apparently, Duncan had ended up in a shelter where he was adopted by an elderly woman. “She was an elderly lady and the dog ended up being her companion for about ten years,” Kipp says.

Duncan’s adopter eventually passed away, and afterward her daughter took Duncan with her to Missouri. He got loose and was picked up by a local rescue group. They were surprised to learn that Duncan had a microchip: nobody had ever bothered to check for it.

11 thoughts on “Missing Corgi Reunited with Family After 11 Years”