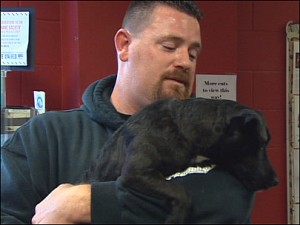 A Rio Linda, CA dog was found Friday, over 700 miles away from home in Lakewood, Washington. He had been missing only three days.

Bear, a Padderdale Terrier, usually spends his days passing time with owner Brian Rapozo at his workshop, but on Tuesday, Bear went missing. Only three short days later, a woman found him roaming in Lakewood, WA and turned him in to the Tacoma animal shelter.

The Humane Society scanned Bear and traced his microchip to Rapozo, who was both thrilled and baffled by the news. Nobody can be sure how the little dog ended up so far from home, but Rapozo’s best guess is that Bear hitched a ride with a long-haul trucker passing through town.

Speaking of long hauls, Rapozo drove thirteen hours to Tacoma on Saturday to pick up his best friend, and KOMO cameras were there to capture the joyous reunion.