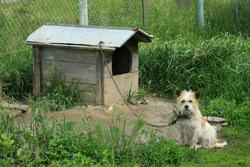 Municipalities across the country have recently taken measures to ban residents from tethering their dogs.  At the very least, provisions have been made requiring owners to keep tethers on a pulley so their dogs have room to run.  A Canadian city is now the latest to rethink their cruelty laws regarding the issue.

Anti-cruelty laws are already in effect in Richmond, British Columbia, but officials are seeking to clarify the law on tethering.

“We’re taking tethering as cruelty to animals and unattended dogs,” said council member Bill McNulty.  “We have a by-law that supposedly covers it, but we have gone one step further to actually mention tethering, the idea of leaving a dog unattended for more than a certain period of time, so that there’s no question about it when it comes to cruelty to animals,” he added.

British Columbia’s second largest city after Vancouver, Surrey, is also drafting a by-law.  Mayor Dianne Watts wants to ensure a proper discussion of the matter at the upcoming Union of BC Municipalities Convention.

“When somebody tethers their dog and goes in and grabs a coffee, this has got nothing to do with that,” she said at a council meeting in June. “This is around the care of the animal and the long term repercussions.”

Leaving dogs alone, especially tied up, for a lengthy period of time can wreak extensive psychological damage.  Not having (positive) social interactions can make dogs fearful and aggressive.

“To basically sit, become bored, they develop behavioral problems and it can definitely lead to significant welfare concerns for these animals,” explained Marcie Moriarty of the BC SPCA.