Some people just don’t know when to stop.  People like Kalamazoo County resident Kelvin Thomas are some of the worst when it comes to this sort of thing.  He’s now facing dog fighting and animal abuse charges, after being convicted for similar charges once before.  Thankfully, all of the dogs in his possession were safely removed before the situation got worse.

Kalamazoo County animal control, along with police and volunteer assistance removed ten dogs from Thomas’ home in Oshtemo Township, Michigan.  They wanted to stress the fact that all ten dogs removed are in good care as of now, being kept warm, safe and fed.

“They didn’t have water, several were quite thin, they were anxious to get to a warm place,” said Stephen Lawrence, Kalamazoo County Director of Animal Services.  “Most of them are young, he was just starting to build his colony of dogs.”

Animal services was tipped off to Thomas’ behavior by a concerned neighbor.  That neighbor contacted animal control, and it didn’t take long for them to get to Thomas.  A warrant was served Wednesday morning, and that’s when the dogs were removed.

Upon execution of the warrant, ten dogs total were taken from Thomas’ property.  Most of the dogs were around six months old, with the oldest being about two years.  Lawrence and the staff with animal control did say that the dogs didn’t have any scarring or outwards signs of being in a fighting ring, and they are very hopeful that all of the dogs can be rehabilitated.

Thomas is not an unknown entity to law enforcement.  He was arrested and charged with animal cruelty and dog fighting charges back in 2012.  A total of 36 dogs were removed from his possession at that time, and he got a 2 year probation sentence.  Thomas is insisting that this time around the dogs were not intended for fighting, but still faces felony animal abuse charges this time around.  Hopefully, this carries a much stiffer penalty.

“He had been advertising that he had the dogs, or the puppies, which they do for fighting dogs, advertising them as the son of a three time champion,” said Lawrence.  “Michigan has some of the best cruelty laws in the country, the problem is the penalty for those laws is not as strict as it needs to be in a lot of cases.”

The full set of charges against Thomas this time around have yet to be released.  Animal services and law enforcement are still investigating Thomas, to make sure that they hit him with everything they possibly can.  A representative from the national branch of the Humane Society said that the dogs will be evaluated, and then taken out of state for adoptions. 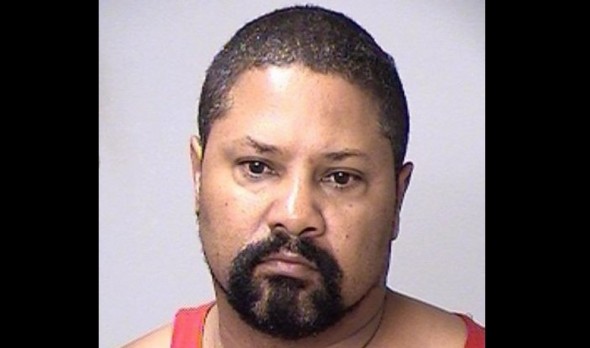