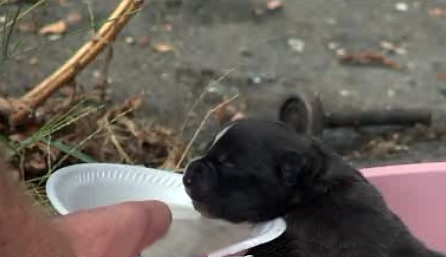 When Richmond, VA.  firefighters arrived on the scene of a reported building explosion and fire on Hull street, they found more than they bargained for – and thanks to their quick thinking and a perfectly executed rescue mission, seven dogs are alive to see another day.

Witnesses said a loud boom was audible just before flames could be seen spreading throughout the commercial garage. A bowed garage door indicated substantial blast forces.

After a quick assessment of the situation, Firefighters split into teams to tackle two concurrent challenges: containing the flames and evacuating the dogs. The plan went off without a hitch, and six tiny, five day old, soot covered pups emerged from the building in the arms of their rescuers. They received oxygen therapy at the scene to help them recover from smoke inhalation, and all are said to be doing well in the care of their mother after a substantial dose of TLC.