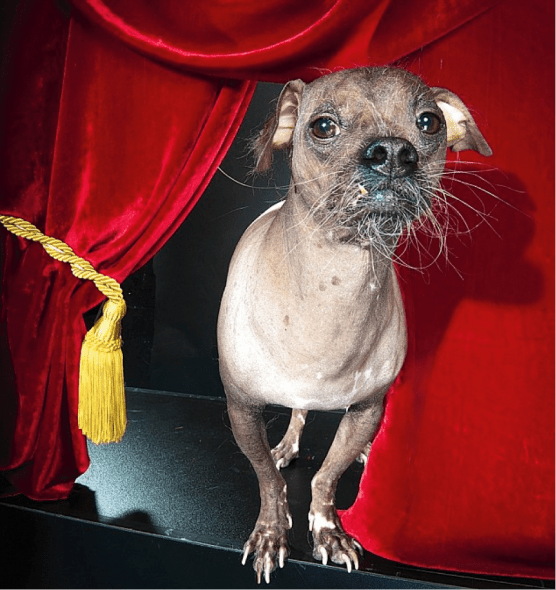 Mugly is officially the world’s ugliest dog – having won the title and the coveted trophy at the anti-beauty contest held in California last June, but that fact alone could mislead the reader of this story…

Mugly’s story is one of a last minute reprieve. He is a small Chinese Crested, who is the result of serious over breeding. He and his siblings were abandoned in England, as pups, and taken to an RSPCA shelter. Because of his appearance, the shelter were planning on putting him to sleep, as they believed that nobody would rehome a dog that looked as bad as Mugly.

He had hardly any hair, apart from a few random hair clumps sticking out of his face, lopsided whiskers, leathery, wrinkled skin, and warts around one eye.  One of the kindest descriptions of Mugly was “he looks like a cross between Dobby the House Elf (from Harry Potter), and Gollum (from Lord of the Rings.)”

Bev Nicholson, from Peterborough in the UK, had been searching for the perfect dog for months. She was looking to rescue, but hadn’t found “the one.” One day she received a text from an acquaintance who was visiting a shelter in Wales. “I’ve found your dog. Ha ha ha,” the message read, and attached was a picture of the tiny, wizened puppy. The acquaintance, of course, was sending a rather insensitive joke.

As soon as Bev saw the picture, she fell in love. “As soon as I saw the puppy’s tiny little face, my heart just lurched. He was bald, and a little bundle of wrinkled skin, but I just fell in love,” says Bev. She phoned the shelter and was told that they were planning to euthanize the puppy within the next few days because nobody would want him. Bev asked them to wait until she could get there, and then travelled 200 miles to save him.

Bev took Mugly home, seeing the amazing personality behind his outward appearance. She says that Mugly was a typical puppy, stubborn, playful, and cuddly. She also says that it is thanks to Mugly that her son is still alive. She describes how Mugly started following her son, never leaving him alone, and snuffling at his head. Her son had been experiencing headaches, but neither of them thought anything was wrong. As Mugly’s behaviour became more obsessive, Bev decided to take her son to the doctor, after reading stories of dogs being able to detect illness. “I thought it was my imagination, but I had to be sure,” says Bev. Her son required immediate surgery to remove a tumor in the brain, and both of them believe it is thanks to Mugly that the tumor was operable.

Bev says she still gets very upset when ignorant passers by say nasty things about poor Mugly, calling him names, and shouting insults. She says “Mugly is as beautiful on the outside as he is on the inside to me. .”

Mugly won the coveted title of the world’s ugliest dog, and has since had a documentary made about his journey. Bev, Mugly, and her son have donated their winnings, and the proceeds from the documentary to a no-kill animal shelter, and a dog fostering organization, to help other dogs like Mugly find loving homes, rather than being destroyed. Bev says that more people should look past the perfect, fluffy bundles of the regular puppies, and look at the soul, and personality lurking inside.