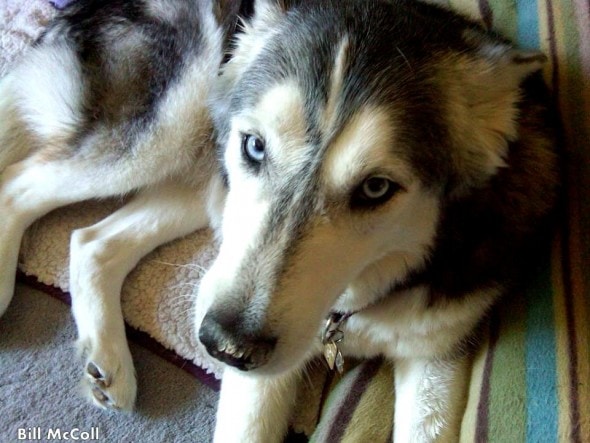 Last summer, I wrote a piece for Yahoo Finance entitled, “My Doctor is a Crook,” explaining how our family physician was caught in a massive scheme involving payoffs for directing blood tests to a certain lab. He is currently spending 3 years in prison for fraud. Now, I have a new problem.

My dog is a crook.

His name is Beachball. He is a lovable, gentle if not a tad overweight Siberian Husky we got from a rescue organization 11 years ago. The group members gave him the unusual moniker for a Husky because Beachball was found wandering the Jersey City, N.J., waterfront without a tag or chip to identify him. As it turned out, he is aptly named, because one of his favorite things to do is lie on our pool deck in the baking summer sun like, well, a beach ball.

Siberian Huskies are known for being intelligent and mischievous dogs who are especially adept at escaping enclosures. We discovered that early on when Beachball would be put in his “house” (a dog crate) when we went out. More times than not when we got home, the nearly 70-pound Beachball would be happily greeting us at the door. We never could figure out how he got out, but I had to resort to putting a Master lock on his crate and hoped his escape skills wouldn’t reach Houdini level. 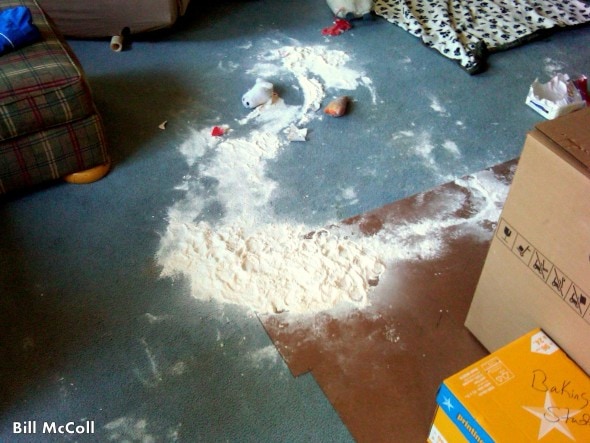 A few years later, Beachball was trustworthy enough (at least we thought) to let him roam free while we were away. But then began his life of crime. We soon discovered he had the ability to open doors. Several times we would arrive home to find Beachball had gotten into the dog food cabinet and had a “snack.” My efforts to discourage that by putting baby locks on the door were no match for this canine, and eventually we were forced to place all potential treats on countertops or in upper cabinets.

Did I mention the pantry? That has a chair placed permanently in front of it after Beachball found his way in, deciding one day that Gold Medal flour was especially tasty.

Beachball apparently likes to choose holidays to pull off his biggest capers. He got onto the kitchen counter to steal our chocolate bunnies one Easter…and another time he took my wife’s Halloween chocolate lollipop treats (in both instances he hid the ones he didn’t eat in the couch cushions). He turned one of our Christmas mornings into a not-so-joyous cleanup after eating an entire bag of gummy bears he had stolen the day before.

Beachball’s most recent theft was of the treats we give to our cat, Megyn Kelly Kat. My wife had recently purchased an industrial-sized bucket of Temptations (Tasty Chicken Flavor) at Costco for Megyn, which we’ve had on the counter for days. Apparently Beachball had been casing the joint for some time, deciding to make his move while both of us were at work in early February. All that was left was an empty 16-ounce container.

Beachball seemed remorseful, but we’re not so sure it was genuine. 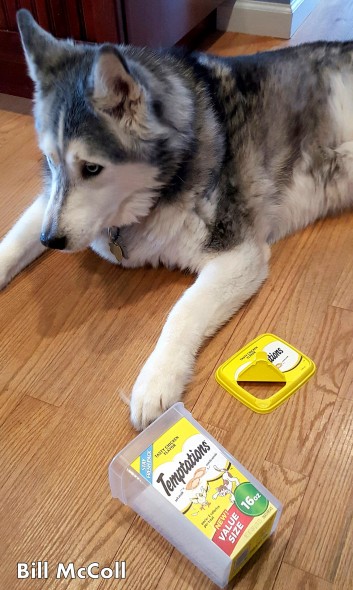 Of course, we tolerate all this criminal behavior because we love our dog, just like millions of other Americans. The American Pet Products Association estimates we spent almost $61 billion on our animal companions last year. That’s double what it was in 2002. Holidays are especially good for pet purchases. A survey of pet owners byTheNosePrint.com, an online hub of Big Heart Pet Brands, predicted for the 2015 holiday season 71% of Americans would be buying presents for their furry friends (New Jersey residents being the top spenders at about $30 per pet). And the National Retail Federation reports that on Halloween, Americans shelled out $350 million on pet costumes — one-third of what we spent on dressing up our kids!

At our house, we certainly have done our share to boost the dog economy. We buy Beachball and our other Husky, Vanya, high-quality dog food at more than $50 for a 30-pound bag. Dog biscuits and other treats are purchased regularly. Of course, there are the veterinary bills, including the $2,000 for surgery to repair Beachball’s torn ACL in his back leg in 2012.

Unfortunately, we have not been able to parlay Beachball’s skills into a profit-making industry like Mishka, the “talking Husky” best known for saying (sort of) “I love you.” Mishka is a YouTube star who’s made national TV appearances and offers her services on her Facebook page: “Media/Biz opportunities” [email protected].  (Although Beachball does now have his own Facebookpage as well).

Nor has Beachball been able to garner the attention given a California cat named Dusty, who is gaining YouTube fame after a local TV station reported his prolific crime spree. Dusty — also known as Klepto the Cat — roams his neighborhood at night, taking clothing, stuffed toys and more. Dusty’s parents think he’s stolen some 600 items in the past 3 years.

Our dog is…just a dog. And a crook. 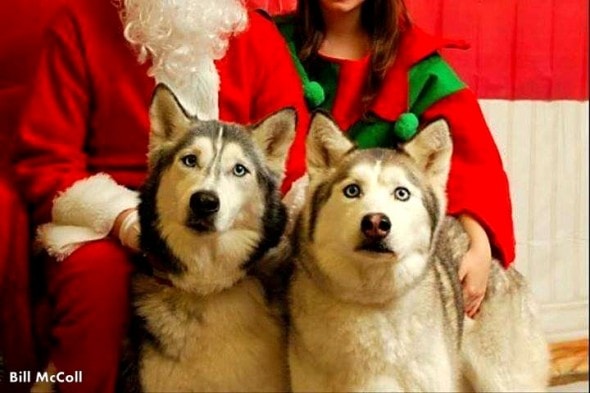