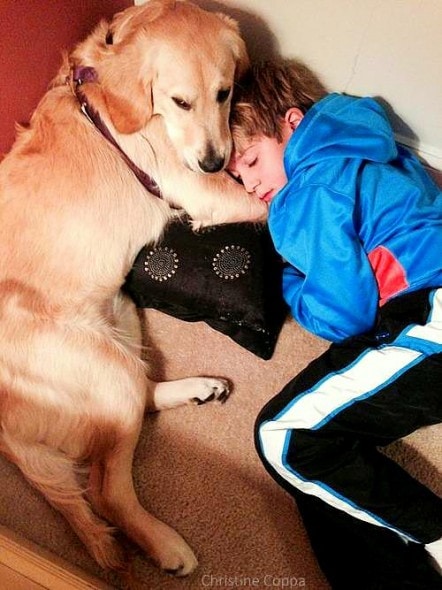 I was in the kitchen making a salad to go with dinner. Jokingly, I replied, “What about a sister?” not completely ruling the idea out, even though I am a single mom.

“I want one of those, too,” he agreed, as he spread his hands through a pile of Legos — a free-for-all on the carpet.

Over dinner I explained to Jack for the 100th time that we can’t just get a brother or a sister, but maybe someday it will happen. Right now our family is the perfect size. 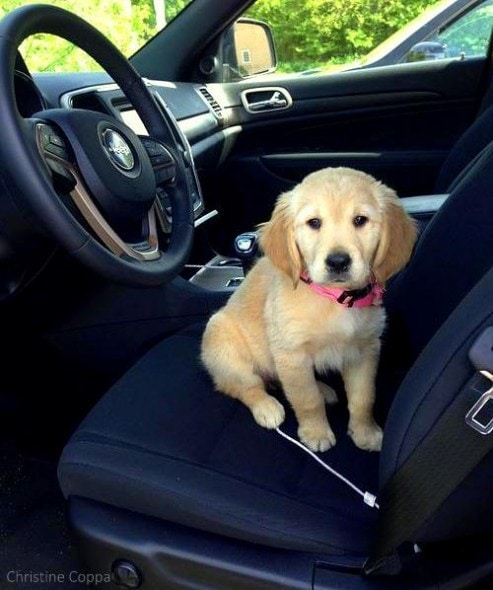 “Everyone has a brother and a sister but me!” Jack said, stomping into the kitchen with his plate.

But a lot of his friends are singletons. Their parents joke: One and done! In reality my goal is: Three for me!

Still, that warm night in May, a gentle breeze rattling the blinds, I felt a little sad for Jack. 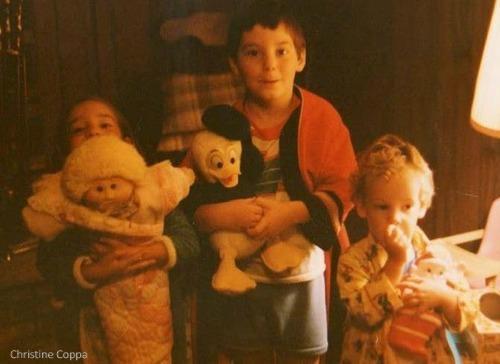 The author pictured with her siblings Christmas morning 1980-ish.

I have two brothers I’m really close to: if we don’t talk on the phone every day, we text. And they both are amazing with Jack, filling in for his absent father. I fell asleep thinking about how my brothers and I used set up the dining room chairs with the tall backs and play car or airplane. There was always somewhere to travel. One minute we were next to the China mom only used on holidays — the next we were magically in China!

A few days later, I started searching online for golden retriever puppies.*  Then I made some calls, then a drive to see the dogs. I didn’t buy the sweet girl with delicious puppy breath that day. I wasn’t sure if I, a single working mom, should add another living thing to the mix. The financial part of being a pet owner worried me, too.

But, the next day, my little brother took a ride with me — and I made an impulse buy of the golden retriever girl. All I had was a bag of food. We stopped at Petco and bought the essentials — then drove to Jack’s school for the big reveal. I got him a sister! Fine, a puppy. 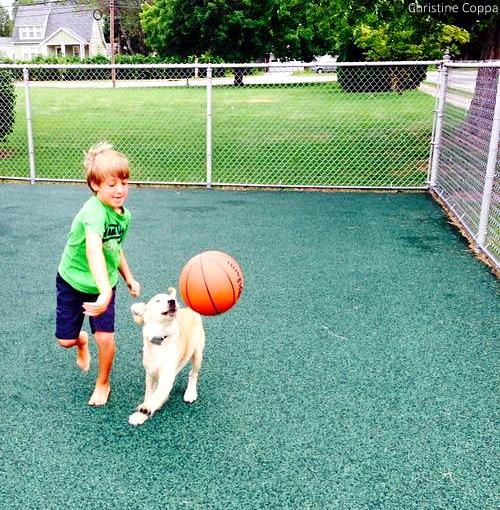 He went crazy. He wanted to name her Sunshine, Charlie, Lulu. We agreed on Lucia and we call her Lucy.

For a child who wants a sibling and a parent who knows that isn’t going to happen, a dog can bring extra love, fun, and companionship into a home, Sarah Wilson, dog trainer, speaker, and author, tells Yahoo Parenting.

The first couple of days were filled puppy pee, crying in the crate at 2 a.m., razor sharp teeth nipping, lots of kisses and cuddles — and a lot more mischief. Lucy quickly fell in love with Jack’s stuffed Spiderman (not so cool with Jack) and my Tory Burch flip flops (not so cool with me). We learned to keep the bathroom door shut at all times since toilet paper is apparently cooler than any squeaky toy or tasty bone. 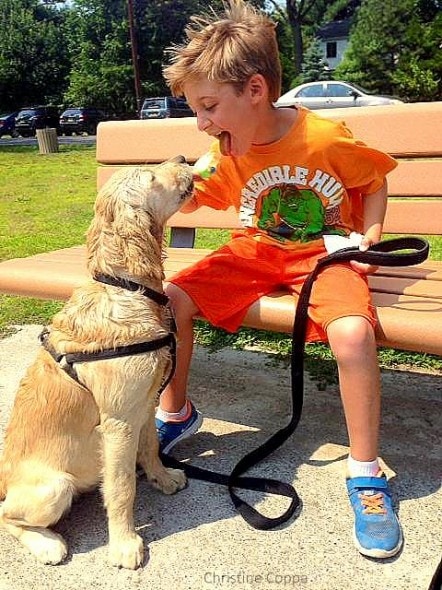 Jack clearly got a kick out of me disciplining Lucy. That’s not surprising: Pets can help detract from the pressure of being the sole focus of a parent’s attention, child development expert Dr. Gail Gross tells Yahoo Parenting.

Pets can also teach the importance of sharing, Gross says, which has proven true. Like brother and sister, they have become best friends — swapping toys and snacks. But, like brother and sister, there’s bickering and fighting, too. That’s something I never had to deal with in our pretty harmonious home here there’s always music on and sunlight filtering in through the blinds.

“Mom! Lucy ate the picture I made for you,” Jack screamed one day, tears rolling down his cheeks. She did. She was shredding it to pieces, hopping around in the mess like it was a first snowfall. It was adorable to watch, but heartbreaking for my son.

“Stupid cat!” he called Lucy, marching off to his room. But, we’re not allowed to use the word stupid in our house, so Jack went in timeout for the name calling and Lucy, who had no idea that destroying Jack’s art was considered bad, got gated in the kitchen. (He calls her cat when she ticks him off. It’s hysterical. My brothers called me “Sissy-Chrissy” to bug me.) 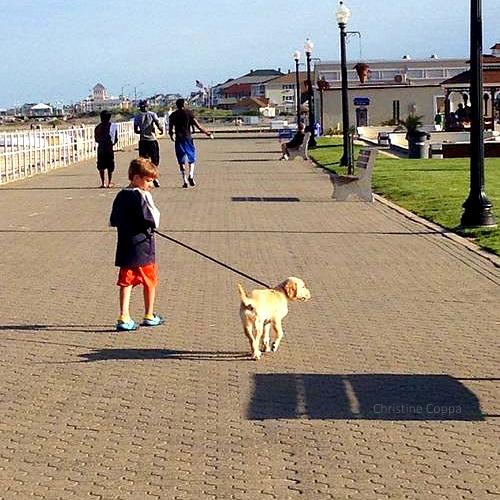 But Jack also acts like a proud big brother to Lucy. He’s always looking behind to make sure she is there. Other times he is completely embarrassed of Lucy for running around our condo with a pair of his Ninja Turtle undies in her mouth — from the dirty laundry basket — when a friend is over.

And they both need space: When Jack is in Ninja, dance party, or Nerf gun mode, Lucy seeks shelter in my room. She’s scared of his remote control cars and hides under the kitchen table.

Still, Jack and Lucy do nearly everything together: Play basketball, watch TV (they love Homeward Bound I and II), nap, hike — you name it. They trip over each other, they are so close. He tells her secrets too. (Nothing serious, just you know, inside jokes and passwords.)

There’s always a bit of a battle at bedtime. “I’m older than Lucy, why does she get to stay up?” Jack whines sometimes.

The two of them test me nightly. Lucy paws at his bed to get in and Jack begs me to let him watch one more show — with Lucy. 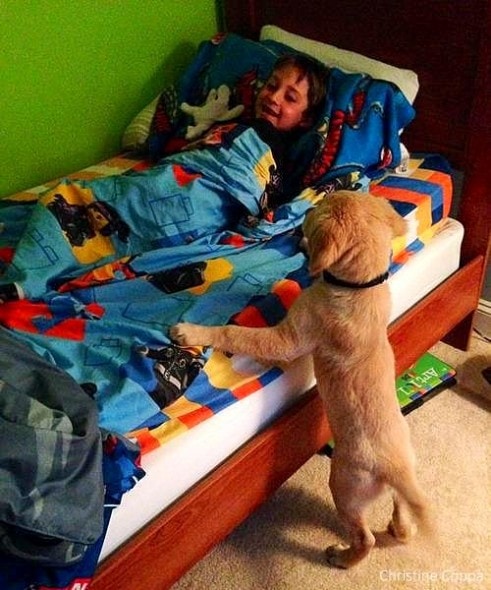 As a single mom, Lucy keeps me company, too — and it really is nice not being so alone in the evenings anymore. And when I got sick with cancer, she was one of the biggest comforts, sensing I was ill and never leaving my side.

“Dogs are students of our behavior. They often read us better than we read ourselves,” Wilson says. “Dogs know when we are ill or sad, depressed or happy both by our actions and our body chemistry. A dog who loves a child can bring a constancy and comfort few humans can equal.”

Lucy turned one on Feb. 22. She’s 51 pounds of love. And even though she’s not Jack’s sister or my daughter — it feels like that and she made our little fam a little bigger.

And I can’t remember the last time Jack asked for a sibling.

*At Life With Dogs, we do not encourage purchasing dogs from breeders, and strongly espouse a “Don’t shop – adopt” position.  There are many lovely, worthwhile shelter dogs who could really use good homes!

All photos courtesy of Christine Coppa.