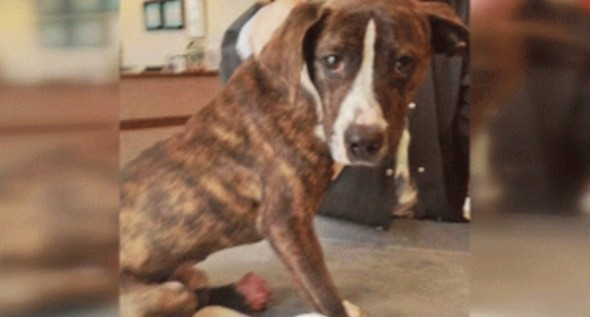 A pit bull mix called Gavin is the fourth animal in Maury County, Tennessee that has suffered a serious injury because of tethering so far this year.  Rescue group Pet Pals said that he had chewed off his own paw in an effort to escape.  Thanks to them, Gavin has a new forever home with a really great family, and a Tennessee lawmaker is seeking to expand tethering laws.

“That tugs at your heart strings,” said Sonjalyn Dickson Rine of Pet Pals.  “To see that exposed bone and that look on his face.  It just looked like he had no hope left.”

Gavin had been dropped off at Maury County Animal Services about three weeks ago.  The person just happened upon him, and said that it seemed like he had his leg caught in a trap.  After a medical examination, it was discovered he had chewed off his own leg to get free from something.  Possibly a trap, but more likely because it was caught in a chain or rope of some kind.

“If it was a trap there would’ve been multiple lacerations to that limb,” explained Dr. Holter of Veterinary Wellness Clinic of Columbia.  “Gavin had a single laceration above his injury, so we’re able to tell it was a chain that caused the damage to his limb.”

According to Dr. Holter, it’s clear that he became entangled with his own tether.  There’s no telling how long his leg was that way before it came down to him chewing it off.  There was a lot of damaged tissues around the wound that matched tissue damage around his neck, where a collar or chain was also attached.

Gavin’s story has sparked Columbia City Councilwoman Debbie Matthews into seeking changes to the existing tethering laws in Tennessee.  Right now, the law states, “If a person commits an offense who knowingly ties, tethers or restrains a dog in a manner that results in the dog suffering bodily injury,” then they have committed a misdemeanor.  Councilwoman Matthews says the law works, but only after it is far too late for the dog.

“Right now we really don’t have teeth to prosecute,” explained Councilwoman Matthews.  She also works with the rescue Proverbs 12:10, which was key in helping Gavin find a home.  “If we pass an ordinance violation for the City of Columbia, there might be a $50 fine associated with a tethering case. There’s really not a law they have broken criminally.”

Matthews is pushing to have the laws look more like they do in Davidson County.  Among many other protections, it straight bans the use of chains on dog’s altogether.  It also allows police to directly intervene if they see a dog that’s been tethered with any device that gets tangled up BEFORE it becomes an issue of physical safety.

Councilwoman Matthews applauds Davidson County for basically outlawing the practice, and making the punishments for breaking the law a bit stiffer.  They went so far as to define what the term tethering is, and made clear violation definitions with clearly defined consequences.  Councilwoman Matthews says the rest of the state is sadly behind the times when it comes to these laws.

“Davidson County said, ‘We need to define tethering’ and they did,” said Councilwoman Matthews.  “The rest of Tennessee is behind.”

The story doesn’t end here for Gavin.  Gavin has since received the medical care he needed, and was rehabilitated and adopted to a very loving family.  Today, he lives a much better life that anything he’s known before.  Hopefully, his story will help make a significant change in the laws in Tennessee.