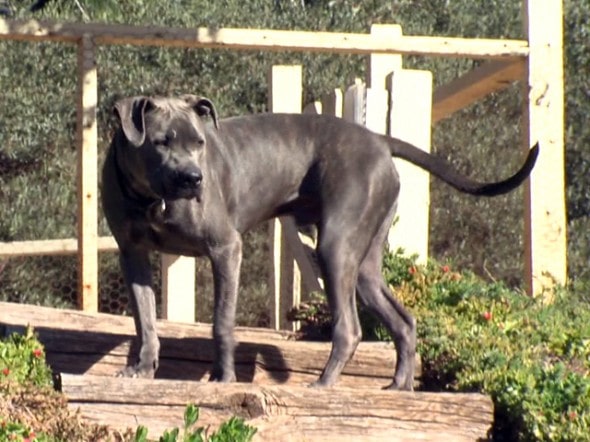 All Hospital Corpsman First Class John Gromer wants is his dog back. When he and his family were relocated to Japan by the Navy back in November their one-year-old dog Gunner got left behind at the airport when the airline told the Gromer family that Gunner’s kennel was two inches too big to load onto the plane.

On November 29th the Gromer family was making the trip to Japan and was planning to bring their dog Gromer with them. That’s when they were told by American Airline that Gunner’s kennel was two inches too big to be put on the plane. John Gromer’s children started crying at the thought of having to leave Gunner behind. To make matters worse Gromer says the ticket agent was rude to the family yelling at them, “Sir, your dog can’t go. Now get him off my scale.”

Gromer had brought the large kennel because he was trying to comply with guidelines stated on the airline’s website that the dog have enough room in the crate to be comfortable. Gromer had given American Airlines the size and the weight of the kennel prior to the flight when he made the reservation and the airline made no objection at that point.  Repeated requests for a statement or answer from the airline by both the press and Gromer have gone unanswered.

Gunner has been staying with a family friend in San Diego. It was originally going to cost the family $175 to have Gunner flown over with them. Gromer has now been told that it will cost nearly $4,000 to fly Gunner to Japan on a cargo plane.

Gromer is frustrated that he was treated so disrespectfully by the airline but most importantly he wants to be reunited with his dog. “I had to walk away in the airport, leaving my dog basically stranded and alone in the airport so I could make my flight,” said Gromer. “All I want is my dog back.”

18 thoughts on “Navy family wants their dog back”