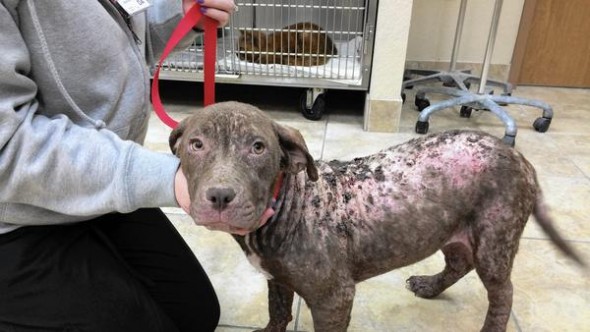 The Cat Protection Society shelter in Eustis, Florida at any one time can house up to 400 cats and kittens that have been abandoned, and tries to find forever homes for as many of them as they can.  Occasionally, they have even opened their doors to dogs in need as well, and are doing so once again for Daisy May.

This poor dog was dumped off near the shelter, found by staff, and brought in for some much needed TLC.  Daisy May is almost completely bald from a skin condition.  It’s gotten so bad from not being treated properly, her skin is all red and irritated.

“I’ve never seen a dog more in need of help, and I’ve done this for 20 years,” said shelter founder Lois Lanius.  “This dog probably started out with a skin condition, and whoever owned her just didn’t do anything about it.”

Even though the no-kill shelter is clearly marked as a safe haven for cats, they took Daisy May in to help her out.  It’s assumed that the people that dumped her there didn’t want to bring her to the pound, which most likely would have had to put her down.

After a full medical work up, it was determined that the dog was suffering from demodex.  It’s a skin condition caused by hereditary mites, microscopic in size, that live in the hair follicles.  They trigger hair loss, and itchy scabs.  It can be quite torturous for a dog to go through untreated.

Daisy May is on antibiotics, and is responding well to treatment.  When she is closer to fully healed, the job of finding a forever home will be a major concentration for the shelter.

“She is sweet dog, affectionate and social,” said Lanius.  “She’s already coming around now that she’s feeling better.  Her tail just wags and wags and she gets more playful.”

Anyone wishing for more information on Daisy May can contact the shelter directly.  Any potential adopters should know that Daisy May will be taking medications monthly to help manage her skin condition.  Even so, she’ll make a wonderful addition to any family in the near future.