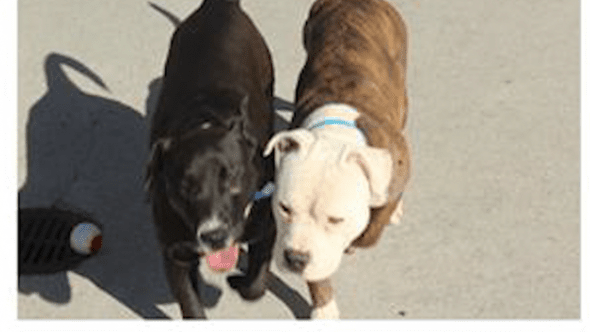 Animal control officers from Gwinnett County, Georgia recently rescued two dogs that were being neglected, but no one on the team of rescuers were ready for what was to happen after.  The pair became fast friends while in the shelter together, and now have become virtually inseparable.  In fact, they are rarely ever seen too far apart now.

The police had gone to investigate a complaint about a loose dog in a neighborhood.  When they arrived to the scene in question, what they saw was not a dog running loose, but two dogs tethered tightly to a tree with little more than a few drops of water and a makeshift plastic hut for shelter. 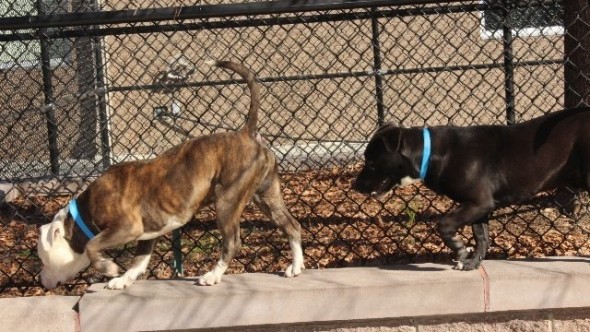 According to the official police report, “The tether was wrapped around the tree and the canine had only about 3 feet of cable.  The canine had no food or water and only had a plastic dog crate for a dog house.  The crate was full of water and mud.  The cable would not allow [the] canine to reach the crate or any food or water.”

No one was home at the residence, however the police decided that this was no condition to be keeping a dog in and it constituted neglect.  They removed the dogs from the property, and both were taken in for a full medical workup. 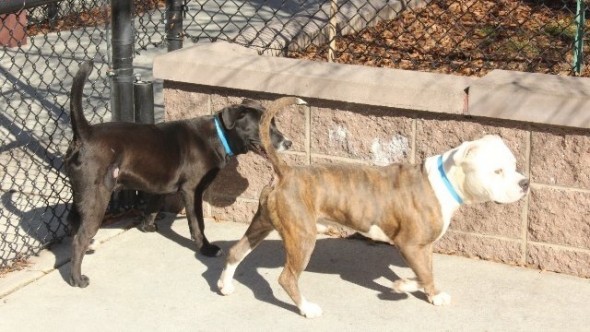 The officers would return five days later to issue four citations for the property owner, Elaina Green.  Green was hit for two counts of neglect, no restraint, and a tether violation.  Both of the dogs were in fair medical condition, so they were both released to the Gwinnett County Animal Shelter.

According to shelter staff, the boys have actually been doing very well together in the shelter.  They are both responding to the medical treatments they’ve been given, and as mentioned, they’re almost never seen apart.  They were going through hell together tied to that tree in someone’s yard, but it seems that has helped them to form a kinship unlike most others.