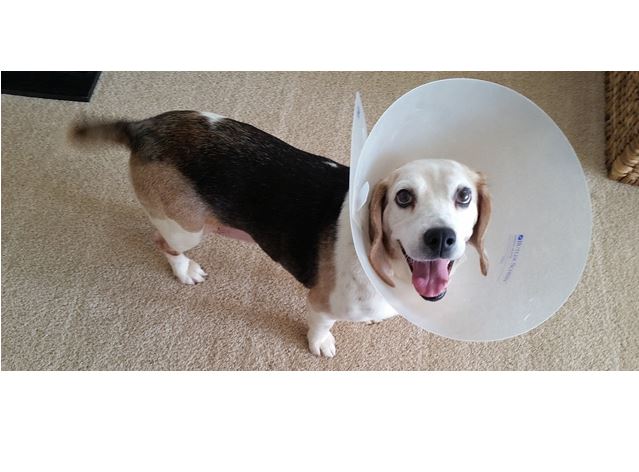 Despite a life as a laboratory test animal and a horrifying incident that followed, Nelly is sweet, trusting and full of joy.

She was used for testing, abandoned, shot, and left for dead. Nelly’s story of survival is heart-breaking but her resilience is inspiring.

The Good Samaritan who found Nelly in a crate on the side of a road in Florida contacted Beagle Freedom Project,the ARME offshoot that rescues and rehomes laboratory test animals, and BFP took Nelly into their care. Nelly is now getting much-needed medical attention and is learning about life as a happy dog in a loving foster home.

Despite all the adversity and abuse she has known, Nelly has a friendly and sunny disposition and she wags her little tail all the time.

On December 3rd a concerned citizen in Florida spotted a crate off the side of a rural road. When she stopped to inspect it she found three beagles stuffed inside. All of them had been shot and were left for dead. Two were. One was still holding onto life.

The terrified little beagle was scooped out of the crate and taken to the woman’s home. There they discovered her bullet-wound had luckily gone through the flappy area under her jugular, it was no longer bleeding and beginning to scab over. While examining her they also discovered that tell-tale tattoo stamped inside her right ear. A series of numbers etched in ink betraying her true origins; a research laboratory.

This sweet savior knew this dog needed special help and got in touch with Beagle Freedom Project. She has been named Nelly and we have since stepped in with emergency veterinary care and a committed foster to tend to her physical and psychological needs.

Her needs are great. Her veterinary inspection has revealed a history of abuse, neglect, and disease. Nelly had expensive dental work done, the vet believes she had been chewing on metal for some time like part of a cage or a chain because her bottom teeth were ground down. Most troubling was a tumor that was handing between her hind legs. A week ago she had surgery and the doctor found an additional five more. The biopsy results show she has Grade 2 Mammary Gland Carcinoma.

Despite it all, her years as a test-tube, her uncertain but nightmarish time after the lab, being dumped like trash on the side of the road and shot in her throat, being trapped for God knows how long with the dead bodies of those poor other beagles, and now full of drains, stints, and the growing cancer in her body – she has a contagiously excited and happy spirit. Nelly is a beagle after all.

Nelly’s federal ID tattoo fits the profile of a breeder supplying several Florida research laboratories. BFP is investigating with the hope criminal charges can be brought against the guilty party or facility. No matter what though Nelly’s story underscores the danger of only knowing these animals as a series of numbers. Without names or identities researchers or the people they gave Nelly too (possibly a hunting program) felt comfortable doing otherwise despicable things.

Nelly deserved better than the life she has lived and for as long she has left now Beagle Freedom Project is going to support her and we are going to tell her story to advocate for all those other dogs we cannot and could not help, like the other two dogs that died in that crate.

Watch the video of Nelly’s story:

The Beagle Freedom Project gratefully accepts donations to help with their rescue efforts. They are accepting dedicated donations for Nelly.