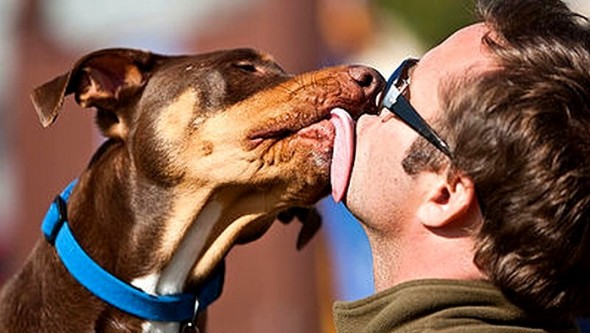 A study on human and animal interaction is demonstrating that despite their penchant for sniffing and eating all sorts of unsavory things, dogs may be making you healthier with probiotic kisses.  So put down the yogurt and give your pup a smooch!

Researchers at the University of Arizona (UA) believe that the microbes in a dog’s gut can encourage the growth of positive microorganisms in humans.  They’re hoping to recruit participants to help them test their hypothesis.

“We’ve co-evolved with dogs over the millennia, but nobody really understands what it is about this dog-human relationship that makes us feel good about being around dogs,” said anthropology doctoral student Kim Kelly.

“Is it just that they’re fuzzy and we like to pet them, or is there something else going on under the skin? The question really is: Has the relationship between dogs and humans gotten under the skin? And we believe it has.”

Multiple departments at UA will team up with the University of California, San Diego to see if close contact with dogs strengthens health in older adults.

“We essentially want to find out, is a dog acting like yogurt in having a probiotic effect?” Kelly said.

We know already that children who grow up with dogs tend to be healthier than kids who don’t.  They suffer fewer respiratory and ear infections, and see a decreased likelihood of having asthma and allergies.  Our immune systems are fortified by exposure to small amounts of bacteria that it learns to fight off.  Routine exposure to dog germs make kids immune to them.

Other research has shown that dog owners generally tend to be happier and have decreased risks of heart disease.  So now scientists are hoping to prove that as with children, adults who share dog gut bacteria are physically healthier.

“We think dogs might work as probiotics to enhance the health of the bacteria that live in our guts. These bacteria, or ‘microbiota,’ are increasingly recognized as playing an essential role in our mental and physical health, especially as we age,” said Dr. Charles Raison, researcher and UA professor of psychiatry in the College of Medicine.

“We know that not all bacteria are good. We can get very sick from the ‘bad’ bacteria, and modern medicine has done a wonderful job of protecting us from various diseases that are created by these bacteria, but unfortunately, by eliminating the bad bacteria we’ve started eliminating the ‘good’ bacteria, too.”

Participants in the study must be at least 50 years of age and cannot have lived with a dog for at least 6 months.  They will be paired with a humane society dog that will live in their home for three months.  Investigators will non-invasively evaluate the participants’ diet, physical activity level, gut bacteria, and immune function.  The dogs will be similarly evaluated.

The exams will be repeated after one, two, and three months to see if there have been any positive changes on gut microbiota in the humans or dogs.  They will also see if there are any changes in the humans’ and dogs’ health and emotional well-being.