As part of its ongoing mission to enhance dog ownership by improving the emotional bond between humans and their canine companions, Bark Busters, the world’s largest dog training company, has pooled the collective experience of its U.S. trainers to compile a set of findings that provides insight into the human-canine training dynamic and the realities of everyday dog behavior in America.

The survey of Bark Busters’ trainers across the nation, who work one-on-one in the homes of owners and their dogs, dispels several myths and contradicts conventional thinking about dogs and training. The survey, conducted April-June 2011, clearly indicated that you can “teach old dogs new tricks,” or, more accurately–senior dogs were easier to train than the average dog in terms of time and effort. 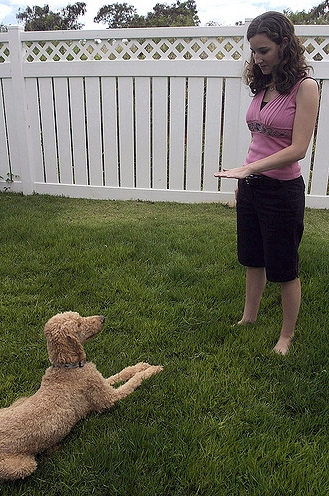 And the easiest-to-train breeds? Golden retrievers, pit bulls (commonly targeted by breed-bans) and poodles. Conversely, popular family breeds–Labradors, bulldogs and beagles–were found to require the most time and effort to train.

Trainers were first asked to select the three breeds they had trained the most often, in mixes or purebreds. Labradors were chosen by 80.6% of respondents, followed by pit bulls, with 46.4%, and Yorkshire terriers at 26.4%. Labradors also came in first (28.3%) when trainers were asked to choose the three most difficult to train (based on time- and effort-intensity of training) breeds, followed closely by bulldogs (27.0%) and beagles (26.4%). Pit bulls, on the other hand, made the easiest to train list (42.5%), along with golden retrievers (45.8%) and poodles (30.3%).

“You might expect that the breeds we get called on to train most often, like Labs, would be the most difficult; owners typically don’t seek out a trainer if their dog has easily addressed behavior problems or training needs,” said Liam Crowe, CEO and Master Dog Behavioral Therapist at Bark Busters USA. “But, while we are hired to train pit bulls second-most often, they have also been the second-most easily trained breed. This might say something about the stigma surrounding that particular breed.”

While finding these results interesting, Crowe added: “Every dog is different. Breed is not the primary determining factor in a dog’s temperament and behavior. By and large, the dog’s owner, his or her relationship with the dog, and the circumstances within the dog’s environment are the primary factors in a dog’s behavior.”

When asked to rank the ease of training dogs on a number of factors, trainers said that senior dogs and mixed breeds were actually easier to train than the average dog; more difficult to train were puppies and small or toy dogs. However, while the trainers indicated that they do see some significant differences based on age and breed, they ranked them as the least influential factors on the time and effort required to train any given dog.

The top three most influential factors chosen had nothing to do with the dogs themselves, but instead were dependent upon the owner–on a scale of 1 to 5, 1 being no effect and 5 being major effect, the owner’s consistency with training ranked a 4.9. Owner’s personality came in at 4.6, and owner’s bond with the dog logged a 4.3.

“We’ve always known that the success of training any dog depends on the owner and their commitment to building a strong positive relationship with the dog and their consistency in reinforcing the desired behaviors, so we weren’t surprised to hear our nationwide network of trainers echo that sentiment. We often joke that our real job as dog trainers is to train people,” said Crowe.

“We give dog owners the best chance at success with their dog by providing them with tools, knowledge and guidance to create a balance of respect, trust and bond, day in and day out. It’s not about our relationship with a client’s dog; it’s about the owner’s relationship with his or her dog. And that’s the difference people need to understand between what they see about dog training on television and what the realities are of the human-canine bond and the likelihood of training success in the more than 70 million dog-owning households in America today.”

Survey participants included 155 dog trainers from 37 states with a collective 750 years of experience and more than 200,000 dogs trained since 2000. The results both contradict commonly held beliefs about canines and trainability and provide a glimpse into the realities of everyday dog behavior issues in American households. For more information and full survey results, including the most common behavior issues, visit http://www.barkbusters.com/page.cfm/ID/457 .