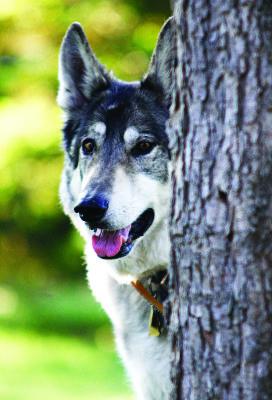 When a truck driver adopted a 6-week-old wolf cub, he was just looking for a companion to accompany him on long hauls. Nick Battles says he had no idea that the North American Gray Wolf would one day save his life.

Kodie was protected by the Endangered Species Act. At his home in Woodland, Kodie is the protector. The twelve year old evolved from a companion dog to a service dog over the course of a few years.

Battles was diagnosed with diabetes in 2004 and shortly thereafter, realized that Kodie would lick his arm within 30 minutes of him needing to take insulin.

“Kodie started to let me know there was something going on,” Battles said.

After enrollment in a training course Kodie was certified as a service dog.

“It didn’t take him much time; he picked up on it right away,” Battles said. “It’s really nice because now he can go everywhere I go, in stores and restaurants.”

Battles says the decision to take Kodie in was life changing in more ways than one. “He’s just been a really great friend,” Battles said. “He’s really good. I’m bonded to him more than I have been bonded to any other dog.”

When Battle raised Kodie, the wolf pup would fall asleep with his owner’s hand in his mouth like it was a security blanket.

“He acts real independent, but if I get out of his sight he starts to whine and howl,” Battles said. “He keeps a pretty careful eye on what I’m doing.”

Battles says Kodie has traveled to more states than many Americans, loves snow, vanilla ice cream, and for some reason, loves to play with any Chihuahua he meets. Since his retirement, Battles and Kodie are spending their days camping and enjoying time together. The pair will be vacationing at Lake Almanor in June.