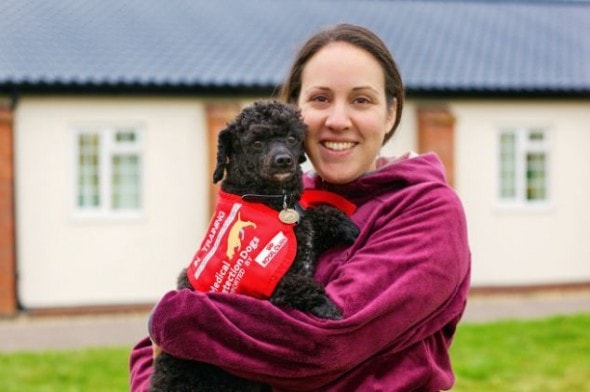 Nut allergies are a very common allergy, but for some it is a life threatening condition. Yasmine Tornbald has been rushed to a hospital over 20 times in the last eight years because of her nut allergy. Now thanks to Nano, a trained nut sniffing dog, managing Tornbald’s nut allergy has become easier.

Nano spent a year being trained by Medical Detection Dogs, a charity based in Milton Keynes, Bucks, England. He is able to detect nut odors in food and the environment. Tornbald’s nut allergy is so severe that even the smell of nuts is enough to put her into anaphylactic shock.

Simple things like a new laptop bag at work can even pose a threat to Tornbald.

“If a new laptop [bag] comes into the office I will put it on the floor and get Nano to sniff it to make sure it is free from nuts,” said Tornbald. “If he detects traces of nut on it I then clean it or swap with someone else. Having Nano around has made my life so much easier.”

Tornbald first learned about how a dog might help her condition when she saw a television show about dogs in Canada that had been trained to sniff out peanuts. With the idea in her head she began to contact charities throughout the UK to see if anyone would be able to provide her with one.

“I heard back from Medical Detection Dogs who said they may be able to help and they linked me up with Nano,” said Tornbald. “It was so exciting.”

Nano has already made a huge difference in Tornbald’s life and she would recommend that anyone else who is in a similar position as hers to consider the option of getting a dog trained to detect nuts.