On Thursday, Nov. 20, 2014, a Rottweiler survived being thrown from a moving car while trapped inside a sleeping bag. The car was traveling in Queens, NYC, near the Jackie Robinson Parkway. The dog was saved thanks to other motorists who witnessed the cruel act. 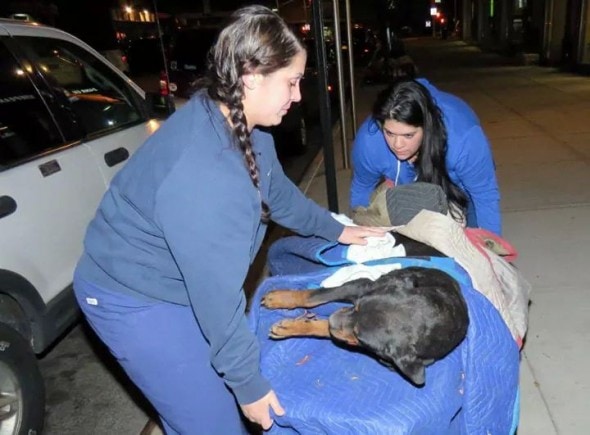 It was 10 p.m. when a Ridgewood fire truck on its way to a different emergency, was flagged down by the dog’s rescuers on the side of the road. The firefighters helped saved the dog’s life by transporting her to the nearest Blue Pearl clinic.

According to Firefighter William Aaron, the dog now named Dasher, had bruises on her body and suffered from hypothermia and head trauma.

“My heart was broken. She was shaking like a leaf. It was horrendous,” Aaron told NY Post.

Veterinarians stabilized the dog and placed her on oxygen treatment while they waited for x-ray results to determine internal injuries.

Aaron went to see Dasher after his work shift ended and promised to adopt her once she heals and is out of the woods.

Police have opened an investigation and hope to capture Dasher’s abusers.